We Are Not Against Increase In Terminal Tariff—NSC

The Nigerian Shippers’ Council (NSC) has stated that it is not against the increment in terminal tariff, but said the tariff must be justified with the consent of the council as the lead agency in the port. 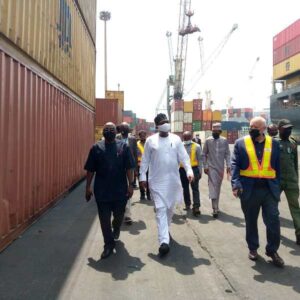 Mr. Hassan Bello, the Executive Secretary of NSC stated this on Wednesday during an inspection of some port terminals in Lagos.

Bello, while speaking during a meeting with the management of PTML acknowledged that, although there may be need for review of charges, the review of the charges must be done through consultation with the port economic regulator.

While adding that any review should be reflected in service delivery and the procedures must be carried out in an orderly manner.

Highlighting some of the challenges of confronted by port terminal operators in the country, the Managing Director of Ports and Cargo Handling Services Limited, Mr. John Jenkins urged the Federal government to speedily conclude the construction of port access roads, stating that the roads are the biggest challenge that has led to increase in the cost of doing business at the ports.

Justifying the tariff hike, he said, “we need to increase tariff because we haven’t done so in over nine years while the cost of operations has increased. Our workers are expecting an increase in salaries. The cost of fuel and other necessary costs have also increased,” Jenkins said.

The Shippers’ Council boss however commended Ports & Cargo Handling Terminal for its improvement in automation, adding that the company should strive to attain a position where all of its services are done online.

“All transactions should be done online. As an indigenous operator, we want you to be number one in digitization. When we had the last rating on automation, you scored 25 percent but we are happy that it’s 50 percent today. We encourage you to attain 70 percent in the next three weeks,” Bello said.

Speaking at the Ports and Terminal Multi services Limited, Bello commended the management for attaining 90 percent automation of its services.

The NSC boss told the company that the next achievement should be a round-the-clock port operations, even though he noted that security issues, bank operations and poor lighting could affect 24 hours operations.

He commended PTML for its high level automation, noting that the company is rated 90 percent for automation and shippers have commended the terminal as the best for seamless online transactions.

The terminal also identified lack of 24 hours banking operations as reason 24 hour port operations have been difficult to achieve.

Speaking on why the terminal recently increased its terminal tariff, he informed that for almost 10 years, the company has not increased its charges, while pointing out that despite the growing inflation in the country, every year, the terminal has been committed to increasing its staff salaries.