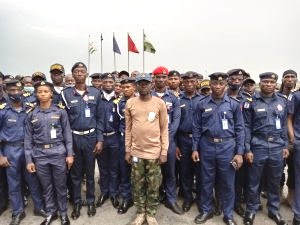 Agaba said in Lagos on Saturday that the force was prepared to take battle to the criminal hideouts.

He said also that the group had joined forces with the Nigerian Navy and the Police to check coastal criminals in Lagos.

The suspects were handed over to the police for prosecution, he added.

“We carried out surveillance on waterways in Lagos and now know the criminal hideouts.

“We identified them but we lack logistics to carry out arrests. We use locally made boats. We need speedboats for patrols, arms and other equipment.

Read Also:  Who Is Afraid Of Review Of The Nigerian Port Concession?

“We want the government to empower us; we promise that within one week, these criminal elements operating on the waterways in Lagos will be arrested. We have the manpower, but lack logistics.

“I have written to Lagos State government for logistics; if we have the necessary equipment, criminals cannot come from elsewhere to commit crime in Lagos and escape from our men,’’ he assured.

Agaba said another major challenge the group faced was physical structures and welfare of personnel, stressing that its men currently operate from make-shift tents at their Kosofe waterfront base, Ogudu Orin-Oke.

“We don’t have basic salary; we contribute money, foods and material things with which we sustain ourselves. Some people bring water and other needed things. That is why we appeal to the state and the Federal Government for logistics,’’ he said.