Fully 247 out of the 301 personnel aboard the South Korean destroyer Munmu the Great have tested positive for COVID-19, according to South Korea’s Joint Chiefs of Staff. 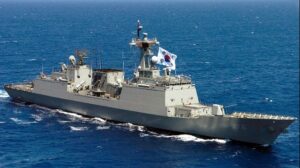 The Munmu the Great was nearing the end of a six-month anti-piracy mission off the Horn of Africa when the COVID outbreak was detected. Last week, the vessel reported that one officer had been medevaced for treatment for COVID symptoms, and five more individuals who came into close contact with the victim tested positive as well. This prompted testing for all crewmembers, and 62 more were confirmed positive by the weekend.

An additional 179 tested positive Sunday. 50 tested negative and four results were inconclusive, the ROK Joint Chiefs said. 16 crewmembers have been hospitalized, including one who is in intensive care, and the rest have been isolated on board.

On Thursday, South Korean defense officials said that a medical team and supplies had been sent to the vessel. South Korean President Moon Jae-in also ordered the mobilization of two aerial tankers in order to evacuate the entire crew – including the hospitalized individuals – and bring them home for care. The operation will be completed on Tuesday.

A relief crew will fly out with the airlift and will take over command of Munmu the Great (after sanitizing). The vessel will end her current mission early and return to base in South Korea.

The Munmu the Great set sail in February after a period of quarantine for her crewmembers. None of them were vaccinated before coming on board: the vessel sailed before the first vaccines were released in South Korea.

According to Yonhap, the outbreak on board may have begun after a port call for supplies in an African country last month.