On board a ship, there are lots of terms and phrases which sailors have used across the centuries to communicate with each other. Some of these you may be familiar with, as many of them are a part of everyday conversation and others may not be so familiar. 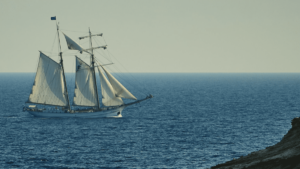 You might have heard this to describe something that is exactly as expected or, more specifically, honest or legitimate. In sailing it refers to when pirates and war ships would often hide some or most of their crew from other ships so as to look like a merchant ship. If a ship had all its crew on deck in plain sight this was known as being “Above board”.

This term is synonymous with the phrase “here today, gone tomorrow” and is often used to describe something that is unreliable, untrustworthy or has a bad reputation. On a ship however it refers to a large extra sail, only used for sailing down wind.

This phrase is more commonly known as “All hands on deck”, but is often shortened to “All hands” onboard a ship. It can also be used for any task that requires a large amount of people taking part to get the job done. Its original meaning comes from being used to call all crew on deck either in an emergency or for a task that requires the full crew’s involvement.

In the past half a century, this has become synonymous with the British children’s TV Show of the same name. However its actual meaning comes from the name for a blue and white flag hoisted to show a ship is ready to leave port. The flag signified that all persons should report on-board as the ship was about to head out to sea.

You may have heard of Davy Jones before, as he’s a character in the Pirates of The Caribbean films. This particular phrase though is a figure of speech for the bottom of the ocean. Davy Jones was considered to be the evil spirit of the sea and his “locker” was thought to be the grave of sailors who drowned.

This usually means a message that has become corrupted or an error in transmission. However in sailing garbling was an illegal practice that involved mixing cargo with garbage.

You might have heard this term used when you or someone else was feeling ill, or didn’t look very well. Its origin though comes from sailors serving a watch on the side of the ship that is exposed to the wind and spray.