For the third time in a year, Australian officials have banned a ship from operating in their waters and visiting their ports over labor contract violations. The Australian Maritime Safety Authority (AMSA) said the bulker was being banned after its inspectors have found repeated violations by the Singapore-based ship management company Bright Star Shipmanagement. 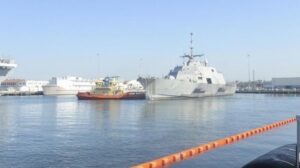 AMSA inspected the 37,000 dwt bulker Western Callao when it arrived at Port Adelaide on September 6 and immediately issued a detention order on the vessel for multiple breaches of the Maritime Labour Convention. The vessel was later permitted to move to Brisbane to carry out a crew change and after the violations were resolved and AMSA was satisfied that the crew had been paid back wages they permitted the ship to depart. Now that the vessel is on its way to Indonesia, it has been banned from returning to Australian ports for six months.

AMSA’s Executive Director of Operations, Michael Drake, noted that it was not the first time this company, Bright Star Shipmanagement, had been caught in breach of the MLC. “In July 2020, AMSA inspected the Western Callao in Port Kembla, NSW, finding that eight seafarers had been on board for more than 11 months. Another company ship, the Furness Southern Cross, was found to have 10 seafarers on board for more than 14 months,” Drake said.

“Australia has zero tolerance for the underpayment of crew. This type of behavior is unethical and in complete contravention to the Maritime Labour Convention. The international conventions that protect seafarers’ rights are very clear,” said Drake. “Ships visiting Australian ports are on notice that if we find deliberate underpaying of crew and attempts to deceive authorities, they can expect penalties.”

The Western Callao became the twenty-fifth ship to banned from Australia since 2014 according to data from AMSA. Five vessels were banned in 2020 after having ranged between two and three vessels in prior years.