The Barge Operators Association of Nigeria (BOAN) on Wednesday dismissed insinuations that barge operations in Nigeria do not conform to international standards. 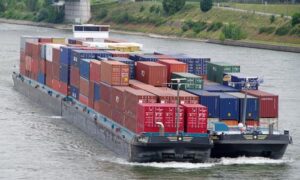 He was responding to insinuations from the Chief Operating Officer of the truck transit park that barge operators in Nigerian maritime space were operating with outdated and outclassed barges that were not up to required international standards.

He noted that with such regulators, anybody in authority having full understanding of barge operations could not say that they were substandard or did not meet international standard.

Eze said that the average cost of a barge was between N70million and N120 million, noting that an investor or operator would not invest in something that had no standard because of the risk involved.

“We read the article emanating from the TTP and with due respect to them, they are doing a great job. We are all stakeholders in this industry and we all want Nigeria to become one of the best maritime hubs in Africa.

‘`We will all join hands together to make it work, but the statement he made, I personally will say that he was talking, not having full understanding of details of how barge operators operate in Nigeria.

“We invest millions of Naira in this business and put in all efforts to ensure that safety and standards are ensured, and so our operations meet international standard,” he said.

On the issue of barges berthing parallel to ships and empty containers being trans-loaded to the ship, Eze said there were processes and procedures for someone to get approval for such to happen, and it had nothing to do with barge meeting international standard.

“There are barges in Lagos State Waterways that have started doing ship to ship trans-loading, so if he takes one out of the whole aggregate, he is talking not having true understanding of how this operates.

“We are not saying that we are 100 per cent good, but for them to say that we are not operating international standard is not right, and regulators are doing their best in that regard,” he said.

Eze noted that these operations take place on the inland waterways, not ocean liners, and inland waterways had their own Act and standard, so if barges operating on the waterways do not meet the regulators’ requirements, they are not allowed to operate.

He said that in checkmating members’ operations, they had set up units that go around to ensure that before even one was registered as member, he needed to meet a minimum requirement for safety compliance.

“We also organised seminars and workshops for members and stakeholders, to create awareness on the need to be safety and standard conscious.

“If we see any member barge that has one issue or the other, we write to the company and advise them on what to do.

“We take proactive measures to ensure that we do not have drastic incidents. In every thing there are risks, even in land transport, but we will take care of the ones we can do.

“We have a Standard Operating Procedure (SOP) for our members, and from time to time, we monitor them to ensure that they are implementing these procedures,” he said.

Citing an example, Eze said there were channels that they passed that did not need double stacking and they pointed that out to members who then did the needful, all in a bid to ensure safety and standard.

“You cannot see a barge moving from Ikorodu to Apapa port double stacking because of the high risk on that route. We are doing all these things because we have to safeguard and secure our investment,” he said.

Recall that recently, the Chief Operations Officer of Truck Transit Park (TTP) Limited, Mr Temidayo Adeboye, said that barge operators in Nigerian maritime space were operating with outdated and outclassed barges that were not up to required international standards.

Adeboye said that this was the main reason why foreign vessels did not allow barges to berth by them to drop empty containers.