The backlogs and congestion at the ports in Southern California have done little to slow the flow of fake merchandise into the U.S. reports U.S. Customs and Border Protection. Last month, CBP reports that its officers working in conjunction with other forces seized over $30 million worth of fake designer products at the Los Angeles/Long Beach Seaport. CBP is highlighting the capture to also warn consumers to be on the lookout for fake merchandise during the current holiday shopping season. 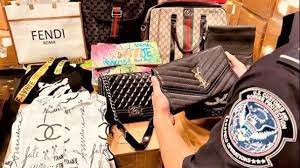 CBP officers assigned to the Los Angeles/Long Beach Seaport in coordination with Import Specialists from the Consumer Products and Mass Merchandising (CPMM) Center of Excellence and Expertise intercepted 13,586 counterfeit designer products arriving in a containerized cargo shipment from China. Among the items that they intercepted were handbags, tote bags, shoulder bags, crossbody bags, backpacks, shirts, and pants bearing numerous registered and recorded trademarks, such as Gucci, Chanel, Fendi, YSL, and Louis Vuitton.

CBP reports if genuine, the seized merchandise would have a combined estimated manufacturer’s suggested retail price of $30,437,775.

Historically, counterfeit products have been sold on illegitimate websites and in underground outlets. CBP says the rise of e-commerce offers a haven for criminals who are now able to hide behind seemingly legitimate listings on well-known websites. The sale of counterfeit commodities multiplies the illegal profits of smugglers and traffickers who reinvest the proceeds from such sales into further criminal enterprises.

“Bad actors exploit e-commerce operations by selling counterfeit and unsafe goods through online platforms, particularly during the holiday season when shoppers are looking for deals,” said Donald R. Kusser, Port Director of the Los Angeles/Long Beach Seaport. “If the price of the product seems too good to be true, it probably is. Counterfeit goods are often of poor quality and can even be unsafe for you and your family.”

To deter the importation of illicit goods and protect U.S. consumers and businesses, CBP has developed a proactive, aggressive, and dynamic enforcement approach to Intellectual Property Right (IPR) enforcement. In Fiscal Year 2020, CBP reports its personnel nationwide seized 26,503 shipments containing counterfeit goods estimated to be worth nearly $1.3 billion had they been genuine.