Following the controversies surrounding the disbursement of the Cabotage Vessel Financing Fund (CVFF), maritime lawyers have advised indigenous ship owners and shippers to unite and seek legal redress over the stoppage of disbursement of the fund by the Federal government. 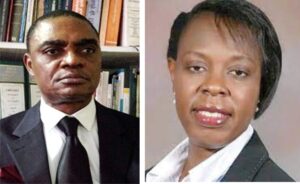 Recall that, while the Minister of Transportation; Mr Rotimi Amaechi and ship owners had claimed the CVFF is a private fund, the Minister of Finance, Zainab Ahmed, had also reportedly claimed that the fund is a public fund, hence it will not be disbursed to the ship owners who are private entities.

These positions have however elicited contentions among lawmakers and stakeholders in the maritime industry about the provisions of Cabotage Law as it relates to the CVFF.

While speaking with Shipping Position Daily, Barrister Jean Chiazor Anishere noted that the CVFF is a legitimate entitlement of indigenous ship owners in the country.

She however advised Ship owners to take legal steps and seek redress for the disbursement of the fund.

In her words: “The Shipowners Association of Nigeria or ship owners generally should approach a good maritime lawyer to advise them on the next step to take. I don’t know why they are afraid or what is inhibiting them from taking legal steps.

“We are not living in a Jungle. If an arm of the government is not doing what they are supposed to do in accordance with the statutes and relevant laws on the Act that the Federal government has promulgated or enacted, then the proper thing for one to do is to seek legal redress.

“I know they have written letters to the necessary arm of government to state their frustration and need or to appeal as it were, although they don’t need to appeal because it is their right or entitlement. But they appeal because we stoop to conquer. They have written to the necessary arms of the government and met severally, but they seem not to be getting positive feedback from the government. So what do you do? It is not by going on protest or disruption of operations concerning the industry.

“This is not a civilised way to do it. The only civilised way I can proffer is to seek legal redress. There are many good maritime lawyers out there who will be able to advise them appropriately and take appropriate steps to engage the Federal Government and to ensure that they do what they are mandated to do in accordance with the law” Anishere said.

On his part, Barrister Osuala Nwagbara decried the delay in the disbursement of the CVFF while stating that it is becoming a very huge embarrassment to the maritime stakeholders as far as shipping development is concerned, especially in the light of the yearning to have a national Fleet.

He noted that the CVFF is not for the Nigerian government or the Nigerian public, but a loan meant for Nigerians who are shipowners or who are into shipping business for the purpose of acquiring vessels to trade within the Cabotage regime and that loan is repayable.

“I do not agree that it is a fund that is meant for the Nigerian government or the Nigerian public. The fund is meant for Nigerians who are shipowners or who are into shipping business for the purpose of acquiring vessels. You could say it is not a fund for an individual. So if you describe it as a fund for the public in that light, then it may be understandable. But if you take it to be a public fund strictly speaking, then it is wrong. I think that the government is being wrongly advised and that is not charitable.

“The CVFF, under section 42 and 43 of the Cabotage Act is meant for giving out a loan to Nigerian indigenous shipowners be it individual or company to purchase ships to trade within the Cabotage regime and that loan is repayable. So this delay in disbursement of the CVFF is becoming a very huge embarrassment to maritime stakeholders as far as shipping development is concerned, especially in the light of the yearning to have a national Fleet” Nwagbara said.

Nwagbara, however suggested that the fund should not be disbursed to individuals, but advised that Shipowners should unite and come together to float a special purpose vehicle in the name of a company, so that the CVFF will be disbursed to them to buy vessels and possess a national fleet.

“My take before now and up to this time is that, that fund disbursement should be not for a particular individual in the light of the experience we have had in the past. But that fund should be disbursed to a group of persons who will come together as stakeholders for the purpose of buying vessels especially in the light of the National Fleet that we are contemplating. These people should be maritime stakeholders who already own a ship or intend to own a ship and come together and float a special purpose vehicle in the name of a company. That money should be disbursed to them and they use it to buy a vessel. When properly managed, they can buy many vessels”, he argued.

“The reason I advocate for the Nigerian maritime stakeholders coming together to use the funds to buy vessels is because management will be better and more transparent unlike when an individual will decide what happens to a company that he is running or what he owns 100 per cent. I must underline that the CVFF is not a government fund, but a fund meant for indigenous ship owners to acquire vessels to trade within the Cabotage legal regime” Nwagbara stressed.