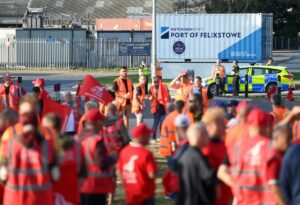 The risk of the Felixstowe strikes dragging on for longer than the current eight-day protest “is causing extreme anxiety for businesses,” project44 warned, adding that delays on goods arriving in time for Christmas are “looking all the more likely.”

Felixstowe, owned by a unit of CK Hutchison Holdings Ltd., accused the Unite union of acting against the interests of its members on Wednesday, saying many are unhappy they’ve been unable to vote on the company’s latest pay offer. A day earlier, a union representative said the strike could go past the planned period if no agreement is reached.

Unite has said that dock workers want a raise of at least 10%, while the company has offered 7% and a £500 bonus.

The biggest beneficiary so far is DP World Ltd.’s port in Southampton, where vessel container capacity jumped 200% as of Aug. 23, project44 said. At London Gateway, also operated by Dubai-based DP World, it was up 45%.

Those terminals are receiving cargo diverted from Felixstowe, where activity has come to a halt and the nearly 2,000 striking workers and the port’s owners appear no closer to a deal.

“Even if the strike is over within a week, which now looks unlikely, it will take containers several weeks to clear out, causing massive delays in the supply chain,” said Josh Brazil, vice president of global supply chain insights at project44.

If that happens, project44 expects that “massive delays will be seen across the UK, with spillover effects into the European Union as containers get diverted to other ports” such as Rotterdam in the Netherlands or Le Havre, France.

What’s more, “many UK and EU ports are already experiencing maximum capacity volumes, so their ability to handle even more may be limited,” it said.