The Federal Government has introduced an application; the National Internal Security and Public Safety Alert System (NISPSAS), which is a mobile application that would be used to secure Nigerian road users owing to high rate of insecurities on Nigerian roads. 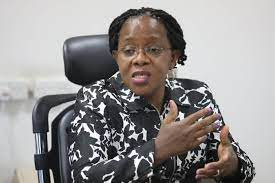 Speaking at the Virtual Dialogue meeting organized by the Chartered Institute of Transport Administration (CIOTA) 2.0 Series with the theme; “Transport and the Challenge of Road Safety in Nigeria”, the permanent Secretary of the Federal Ministry of Transportation, Dr Magdalene Ajani stated that the N-App as it was called, was developed to improve the safety and security of road transport commuters as well as to aid in contact tracing at Motor Parks.

She said that the application is expected to generate accurate statistics for road users and operators and reduce road crimes such as, kidnapping.

She noted that the road transport industry is largely dominated by unregulated privately-owned vehicles.

According to her, the state of deterioration of a significant percentage of this road network has made the road susceptible to various woes resulting to accidents and loss of lives and properties.

“Recently, the security challenges on the nation’s highways such as armed robbery, kidnapping has become very rampant and worrisome. This situation has made it necessary to strengthen safety and security in our road transport system nationwide, she said.

She said: “In the light of this insecurity, the Ministry in conjunction with the Ministry of Interior introduced and launched the Internal Security and Public Safety Alert System (NISPSAS) Mobile App on Thursday, 12th May, 2022.

“The N-App was developed to improve the safety and security of road Transport commuters as well as to aid in contact tracing at Motor Parks. This Application is expected to generate accurate statistics for road users and operators and reduce road crimes such as Kidnapping.

“Distinguished Ladies and Gentlemen, I feel obliged to inform you that our Sister Agency, the Federal Road Safety Commission (FRSC) is doing a lot to stem the tide of insecurity in Nigeria.

“Recently, they Commissioned State of the Art facilities inclusive of Operational Monitoring and Control Room, and Patrol Personnel kitted with Cameras. They have also had a Call Center in the last 4 (four) years that operates 24 hours for emergency calls and are linked to all the Security and Emergency Agencies.

“While the Commission needs to embark on public sensitization to make Nigerians aware of their interventions; it is advisable for the State and Local Governments to adopt this technology to augment their activities.

“Dear Participants, the Ministry is planning on Transforming the Road Subsector through its Road Transport Transformation Programme (RTTP) to ensure that the road transport system supports high level safety and restores the people’s confidence in the road transport mode.

“Similarly, the Ministry through the Department of Road Transport and Mass Transit Administration (RT&MTA) is a critical Stakeholder in the implementation of the five (5) pillars of the UN Decade of Action on Road Safety (2021-2030)”.