The first vessel transporting Ukrainian wheat to support humanitarian operations of the World Food Programme (WFP) has left the port of Yuzhny to the Horn of Africa. 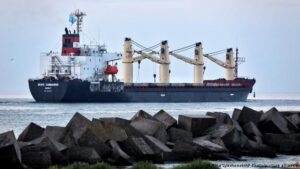 The MV Brave Commander departed with 23,000 tonnes of wheat for WFP’s response in the Horn of Africa where the threat of famine is looming due to severe drought.

The UN food agency disclosed this in a statement issued on Tuesday.

WFP will use the wheat grain shipment to scale-up its efforts in southern and south-eastern Ethiopia, supporting more than 1.5 million people affected by drought.

This is the first shipment of humanitarian food assistance under the Black Sea Grain Initiative signed by Ukraine, Russia, Turkey and the UN in June.

It marks another important milestone in efforts to get much-needed Ukrainian grains out of the war-torn country and back into global markets to reach people worst affected by global food crisis.

“Getting the Black Sea Ports open is the single most important thing we can do right now to help the world’s hungry,’’ WFP’s Executive Director, David Beasley, said.

“It will take more than grain ships out of Ukraine to stop world hunger.

“With Ukrainian grain back on global markets, however, we have a chance to stop this global food crisis from spiralling even further,’’ he added.

Up to 50 million people in 45 countries are at risk of being pushed into famine without humanitarian support.

The current hunger crisis is being driven by several factors including conflicts, climatic impacts, and the COVID-19 pandemic.

The war in Ukraine is another catalyst as the country is a major grain exporter.

Ukraine was exporting up to six million tonnes of grain a month prior to the start of the conflict in February, but volumes now are at an average of one million tonnes per month.

WFP stated that with commercial and humanitarian maritime traffic now resuming in and out of Ukraine’s Black Sea Port, some global supply disruptions will ease.

This, it explained, would bring relief to countries facing the worst of the global food crisis.

Crucially, Ukraine would also be able to empty its grain storage silos ahead of the summer season harvest, the agency added.

WFP stressed the need for immediate action that brings together the humanitarian community, governments, and the private sector to save lives and invest in long-term solutions.

The agency warned that failure to take immediate action would see people around the world slip into devastating famines with destabilising impacts felt by everyone.