The management of HMM and its unions reached an agreement Thursday mid-day, September 2, in Korea after tense negotiations to avert a crippling strike against Korea’s largest shipping line. The talks dragged on for 77 days including threats of mass resignations by seafarers and on Wednesday saw protests and solidarity actions. 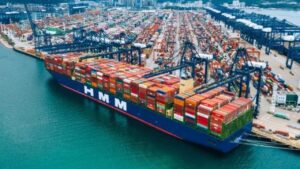 After nearly nine hours of talks on Wednesday, the two sides remained far apart despite efforts by the government and the state-run Korea Development Bank, HMM’s largest debt investor, to find a settlement. Experts warned that strike could be devastating to the Korean economy as HMM accounts for the majority of Korea’s overseas trade and imports. There were also fears of wider repercussions for global container shipping which already faces backlogs and congestion.

In mid-August after three rounds of negotiations, including mediation by the National Labor Relations Commission, the seafarer’s union and the company remained at an impasse. The union said all of its members were prepared to submit their resignations to HMM. The situation became more complicated on August 30, when the union representing the shoreside employees also voted to strike. Reports indicate that as many as 755 unionized office employees were prepared to also walk off the job.

The talks lasted for nearly 18 hours on Wednesday and Thursday led by the CEO of HMM before the agreement was reached. Terms include an approximate eight percent wage increase retroactive to the first of the year as well as 650 percent productivity and incentive bonuses paid within the year. Both the crew and office workers will also get an average nearly three percent cost of living increase. Both sides also agreed to form a committee to restore wage competitiveness and prepare a performance-based pay system.

As the talks dragged on, Haewon union members staged a “placard and picket demonstration” aboard the HMM vessels Hyundai Brave and HMM Rotterdam. Further, on Wednesday night, the National Shipping Labor Union Council and other Korean shipping lines also staged a solidarity demonstration. Korean ships docked in the Pusan port all sounded their horns in unison to support Haewon. The union also announced that it would conduct an eight-hour demonstration on Thursday morning aboard the HMM Gdansko, timed to coincide with the resumption of the talks.

Union leaders said they were not satisfied with the terms but decided to proceed not to cause hardship for the Korean public. They noted the growing concern across Korea. HMM officials apologized to the Korean public. “With this wage negotiation as an opportunity, labor and management will work together to complete the reconstruction of the shipping industry,” HMM said in its announcement of the agreement.