HMM is using the Internet of Things (IoT) in refrigerated/freezing containers to strengthen R&D. It announced on the 26th October, that it will install new IoT equipment and operate it for trial. 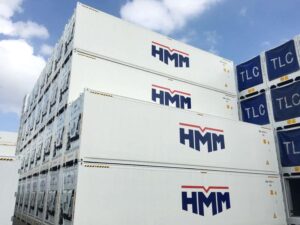 With the recent increase in expensive sensitive cargo, the demand from global shippers is increasing in refrigerated/frozen container segment. When IoT-enabled equipment is installed, not only the real-time location of cargo, but also temperature, humidity, CO2, and vibration can be known.

It is possible to check and control whether or not there is a change in the Internet environment at any given place.

In the past, crew members working on ships directly checked the temperature of refrigerated/frozen container cargo and provided information to the shipper.

It has been challenging in particular, for refrigerated/frozen containers for maintaining a constant temperature to their destination while passing through hot and cold areas. In such conditions, staying at a consistent temperature is the most important thing.

HMM plans to introduce the service earliest after a trial operation such as simulation for 1 to 2 years after the introduction of IoT equipment. When the service is introduced in the future, the quality of service is expected to be further improved, such as cargo transportation being more thoroughly managed.

First of all, HMM plans to complete the installation of IoT equipment in a total of 1,000 refrigerated containers by the end of this year. now end of September.

As a standard, the installation has been completed in about 800 new refrigerated containers, and existing equipment will also be installed by the end of this year. About 200 more will be added.

In addition, a monitoring system to support this will be installed by the end of December, and results will be analyzed and big data will be accumulated from next year.

An HMM official said, “The introduction of new IT technology is the key to shipping competitiveness, and R&D is strengthened to improve service and quality and various IT utilization plans,” he said.

We plan to strengthen our position as an IT frontier shipping company by introducing digitalization, etc.,” he said.

Meanwhile, HMM conducted a refrigerated/frozen container IoT pilot operation once in 2017. In addition to the cloud.

We are concentrating on the digitalization of shipping for the era of the 4th industrial revolution, such as system introduction and shipping logistics system development.