The captain of an Italian-flagged OSV has been sentenced to prison for returning a group of maritime migrants to Libya, their point of origin. 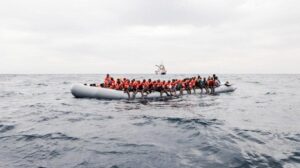 Capt. Giuseppe Sotgiu was the master of the OSV Asso Ventotto (Ace 28) on July 30, 2018, when the vessel was operating at the Sabratha oil platform off the coast of Tripoli. That day, the Ventotto received a request from the Libyan Coast Guard to assist a rubber raft carring maritime migrants at a position about one nautical mile from the platform.

At the time, operator Augusta Offshore reported that the Ventotto’s crew rescued 100 migrants and transferred them to a Libyan Coast Guard vessel, which brought them back to Tripoli for processing.

However, prosecutors in Naples asserted that the Ventotto brought the migrants – including women and children – back to Tripoli on her own, acting on a request from the oil platform’s managers. The return voyage was allegedly conducted with guidance from an embarked Libyan official, and prosecutors contend that the Ventotto’s crew did not attempt to identify the migrants or their potential asylum claims. Radio conversations about this operation were recorded by an NGO migrant rescue vessel which was operating in the vicinity, according to Italian newspaper Avvenire.

The UN considers Libya to be unsafe for refugee returns, given the well-documented rates of abuse in Libyan detention centers. The overwhelming majority of migrants who manage to exit Libya by sea report “arbitrary imprisonment, extortion, rape, forced labor or torture” in official detention centers, according to rescue organization SOS Mediterranee.

Read Also:  UK’s Felixstowe Port Crisis Is Yet Another Sign Of A Collapsing Supply Chain

According to the AP, Judge Maria Luisa Miranda sentenced Capt. Sotgiu to a year’s imprisonment on charges of abandonment for returning the rescuees to Libya. She found him not guilty of a more serious charge, abuse of office.

At the time of the alleged delivery to Libya in July 2018, then-interior minister Matteo Salvini had firmly closed Italy’s ports to any and all vessels carrying migrants – even his own nation’s merchant vessels and coast guard cutters.

Just weeks before the Asso Ventotto incident, the offshore tug Thalassa rescued 66 maritime migrants off the coast of Libya. Salvini personally announced that Thalassa would not be allowed to return to Italy with migrants on board, leaving her unable to operate commercially until another vessel took on the rescuees. Any attempt by Asso Ventotto to deliver her own rescuees to Italy would likely have encountered the same roadblock.