Minister of Interior, Ogbeni Rauf Aregbesola inaugurated eight gunboats for the Nigeria Security and Civil Defence Corps (NSCDC) on Tuesday as part of efforts to curb oil theft in the Niger Delta. 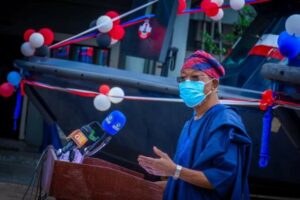 He added that Aregbesola said the move became necessary to strengthen the combative capacity of the NSCDC’s Anti-Vandalism Squad in stemming huge revenue losses to the Federal Government in the oil sector.

According to Aregbesola, oil theft has been ridding Nigeria of revenues running to millions of dollars annually.

He called on security agencies to shun inter-agency rivalries and synergise to support the fight against oil theft to rid the nation of economic saboteurs.

The minister charged the NSCDC as the lead agency in safeguarding the nation’s critical national assets and infrastructure to use available logistics provided by the Federal Government to reduce crime rate.

“By extension take the war against crude oil theft to the camp of the enemy,’’ he said.

In his remarks, NSCDC Commandant-General, Mr Ahmed Audi, asserted that the gunboats would boost the morale of the corps in combating crude oil theft.

He reiterated the corps’ determination and commitment to the war against illegal oil bunkering and assured that the gunboats would be distributed to states in the coastal region.

Audi also assured of the corps’ determination to collaborate with the military and other security agencies to end crime.