Navy Capt. Suleiman Abdullahi, the Commanding Officer, Forward Operating Base (FOB), Ibaka, Mbo Local Government Area, said this when he handed over the rice to the Nigeria Customs Service (NCS) on Tuesday. 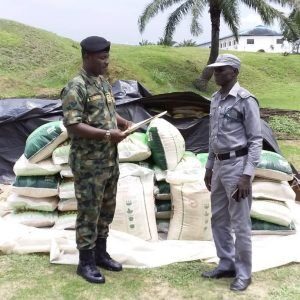 Abdullahi said the 31 bags of rice were seized from smugglers on Aug. 9, on Mbo river, during routine patrol operation.

He also warned smugglers to stay out of the Nigerian maritime environment.

Abdullahi said the suspects on sighting the patrol team abandoned the rice and fled to evade arrest.

He noted that the operatives had arrested one suspected smuggler and impounded 61 bags of rice on Aug 5.

He vowed that the navy would put an end to smuggling on the Akwa Ibom waterways.

Abdullahi commended the Chief of the Naval Staff (CNS), Vice Adm. Auwal Gambo, for the support given to the FOB.

“The Chief of the Naval Staff, Vice Adm. Auwal Gambo (CNS), has given a clear directive to Nigerian Navy to free the waterways of illegalities and other maritime crimes.

“In compliance to that, the Flag Officer Eastern Naval Command, Rear Adm. Sanusi Ibrahim, has further directed all Operation Bases within his Area of Responsibility, to keep up with the Chief of the Naval Staff directive.

“In compliance with the directive, FOB Ibaka, while on routine patrol on Aug. 9, around 17.55hours, along Mbo rivers, our gunboats impounded 31 bags of parboiled rice suspected to have been smuggled into Nigeria from the Republic of Cameroon, while the suspects fled,’’ he said.

He warned smugglers to desist from their illegal acts as the directive of the CNS would be complied with to rid the Nigeria waterways of criminal elements.

“I would like to use this opportunity to warn those maritime criminals that it is not going to be business as usual.

“They should desist from their criminal ways and engage in genuine businesses, otherwise the long arm of the law will continue to catch up with them,’’ Abdullahi said.

He said the service would do everything possible to stop smuggling in the country and warned smugglers to desist from the illegal trade.