The volumes of new ship orders received by South Korea’s shipbuilders hit a 13-year high during the first half of 2021. The South Korean Ministry of Trade, Industry and Energy released the shipbuilding statistics saying that the strong orders were contributing to a rebound in the country’s economy after the impact of the pandemic in 2020. 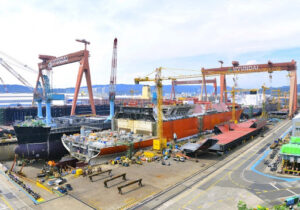 South Korea’s shipbuilders were especially strong with orders for two vessels types of vessels in 2021. The Ministry highlighted the shipyard’s strong performance with two categories of high-value ships. They said that the South Korean yards received all of the global orders for LNG carriers placed in the first quarter. The yards received nearly two-thirds of the global orders for very large crude carriers (VLCC) and LNG carriers, or a total of 7.23 CGT.

The Ministry also forecast that orders for LNG carriers were likely to contribute to the growth in orders for the second half of this year. They said that Qatar Petroleum is expected to place orders after having signed a deal in 2020 to reserve building spots as it works to expand its gas operations.