The Nigeria Customs Service (NCS) Federal Operations Unit, Zone ‘B’, says it seized smuggled goods across the zone with Duty Paid Value of N195.5 million in May. 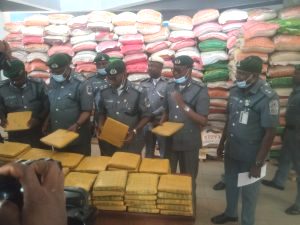 The NCS Comptroller in the zone, Mr Al-Bashir Hamisu, made the disclosure on Friday in Kaduna, while displaying the seized goods before newsmen.

Hamisu said that 103 parcels of Indian Hemp and 104 cartons of assorted pharmaceutical products were seized around Daura axis.

The seizures included 753 bags of foreign per boiled rice, 646 cartons of spaghetti and macaroni, and 355 cartons of assorted soaps.

Hamisu explained that the seizures of cannabis and petroleum products would curtail crime in the area.

He reiterated NCS commitment to tackle smugglers operating in the zone even as he appealed to the residents of border areas to provide the personnel with credible information to contain smuggling activities.

The official also appealed to those involved in smuggling to repent and embrace legitimate businesses.

Hamisu assured that the Customs Service would continue to adopt innovative skills to ensure that smugglers did not harm the Nigerian economy.