NPA Killed Its Own Dockyard, We Can’t Take Ours There - DG

• Says Floating Dock Has No Where To Dock, Isn’t Working

For the umpteenth time, the Director General of the Nigeria Maritime Administration and Safety Agency (NIMASA) Dr. Bashir Jamoh has said the multi-billion Naira modular floating dock can not as yet be put to use. The revelation is coming four years after the craft was brought into Nigeria. 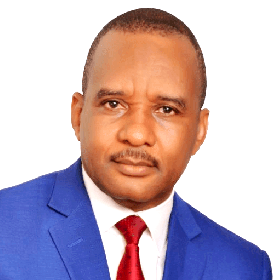 Recall that since the floating dock arrived in Nigeria in 2018, during the tenure of the immediate past Director General, Dr. Dakuku Peterside, it has remained idle and abandoned; hence, jettisoning the purpose for acquiring the N50 billion asset.

The floating dock was acquired to boost the nation’s ship repair capacity and transform Nigeria’s maritime industry for wealth and employment creation.

However, in an exclusive chat with our correspondent last week, the Director General NIMASA revealed that there are many factors why the floating dock is not yet in use.

Jamoh disclosed that top among the factors is that there is no location yet for the floating dock to make it useful. According to him, there are procedures for a floating dock to be put to use.

He explained that the floating was first considered to be taken to the Niger Delta, but owing to the shallow draught of the channel and due to the commercial aspect of the floating dock, it was considered that it should remain in Lagos.

He added that ship owners may not have the confidence to go to the Niger Delta to patronize the floating dock if it was taken there.

The NIMASA boss explained that it took the agency eight months to convince the government to give approval to commence the operation of the floating dock in Lagos, but disclosed that the agency is yet to get a location in Lagos where the craft can be docked.

Even though the partnership with the Nigerian Ports Authority (NPA) for the management of the floating dock had been touted by both the DG of NIMASA and the then-managing director of the NPA, Hadiza Bala Usman as a big possibility, the DG of NIMASA bombed the arrangement.

Explaining why NIMASA jettisoned the planned arrangement with the NPA, Dr Jamoh said, the NPA which could not manage its facility could not be trusted with the NIMASA floating dock.

Throwing more light, he said: “We came here, we had a meeting with the former NPA MD; Hadiza Bala Usman, and we were contemplating whether the management that managed the NPA own can manage ours, I told her (black and white) that they killed your own, they can’t kill our own.

“We learnt from that and we said let’s go the Public Private Partnership (PPP) arrangement, that we will get a managing partner who has the experience and the technical knowhow and the wherewithal to bring customers. It’s one thing to have a floating dock, it’s another thing to have the confidence of the people to bring their ships there”, he said.

Painting a more terrible picture of the misfortune that has befallen the floating dock, the NIMASA boss stated that agency had to temporary import equipment from Netherlands to clip the floating dock.

He said: “As we are talking now, the dolphins that we are going to put for the clipping cannot be found in the country; in the whole of Nigeria, you cannot get the equipment that can put that dolphin into our own sea for you to clip the floating dock, so we have to do temporary importation of the equipment from Netherlands to come only; purposely to put the dolphin and take it back to Netherland”, he lamented.

“I just came back from Abuja to get the consent and agreement of the people that they will give us a location where we can place the floating dock, till now we don’t have a location, he confirmed.

And remember, this floating dock has been there since 2018, nobody worked it, nobody started it, nobody knows how it works, so we have to bring the Damien engineers, they came here several times from Netherland we have to bring the Israelis to come here and work with it, so it’s not that we are sleeping or delaying. Above all, the modular floating dock is not something you can give anybody to kill.

“So what we have is a floating dock that can repair ships, if you don’t have the integrity and the technical know-how, nobody will bring their ship there”

He however assured that, NIMASA is on top of it. “So we are looking for the best for the country, at the same time we are working to see the modular floating dock work; working to see the appropriate place where to put the floating dock, working hard to make sure that we have people who can handle it like a private entity, we get our profit and send to the government. We shouldn’t take it to our own friends and cronies. Everybody that has investment should come and invest”.

At a later date, we will put it in the Stock Exchange and it becomes a public property and everybody owns shares and manages it well” he stated.