The National Inland Waterways Authority (NIWA) has flagged-off an exercise on the removal of wrecks from the waterways in Ibeshe, Owode and Ijora areas in Lagos state. 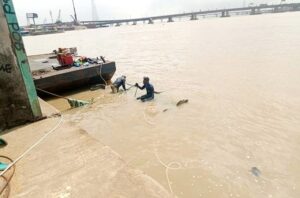 Addressing journalists after inspecting the removal sites on Friday, the NIWA Lagos Area Manager, Engineer Sarat Braimah noted that exercise will span for three months. She said the agency has decided to leave out the Kirikiri to Badagry axis, adding that the Nigerian Maritime Administration and Safety Agency (NIMASA) is already handling that section.

The Area Manager noted that presence of wrecks and human errors are the major causes of boat mishaps on Lagos inland waterways. She however informed NIWA has decided to train boat skippers and also carry out the wreck removal exercise in order to address the menace.

Speaking further, Braimah revealed that NIWA have done some survey analysis of what the wrecks look like and the reports have long been submitted. She said from the survey analysis report, there are abandoned crafts of dredgers and old ferries underneath the waterways which have become wrecks, hence affecting navigation on waterways by boat users.

In her words: “We have identified human error and wrecks as the two major reasons why we keep having boat mishaps in Lagos. That was why we started the training of boat skippers. The training was aimed at addressing the issue of human error leading to boat mishaps on our waterways.

“To address wreck menace, we decided to commence the removal of wrecks in three locations along the Lagos waterways. We are starting today with Ijora, by next week, we will move to Owode and Ibeshe axis to remove wrecks so that waterways users will move freely on the waterways in Lagos.

“We have done a survey analysis of what the wrecks look like and the reports have long been submitted. So the wreck removal is commencing today and will last for the next three months.

“We were supposed to start from the Badagry area, but as you all know, NIMASA has been given the approval to remove wrecks from Kirikiri to Badagry. That is why we are focusing on other areas of the Lagos Inland waterways.

“The Badagry area is close to the routes where ocean-going vessels pass through when coming to our ports, that was why it was agreed that NIMASA should handle that area,” Braimah stated.