The Nigeria Security and Civil Defence Corps (NSCDC), says it will henceforth arrest and prosecute any boat driver who indulges in over-speeding and overloading of boat. 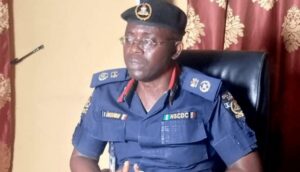 The Commandant, NSCDC, Ondo State Command, Hammed Abodunrin, stated this in a statement in Akure, shortly after a boat mishap that claimed the life of one passenger at Idiogba in Ilaje Local Government Area of Ondo State.

Abodunrin called for caution while plying through the waterways, saying that any ferry operator caught risking the lives of innocent citizens either by overspeeding or overloading would be arrested and prosecuted under the law.

Abodunrin said the Idiogba boat accident would have been averted if the transporter did not overload the boat.

The commandant said all the passengers involved in the boat mishap did not wear life jackets.