Not even one in four people have completely recovered from COVID-19 a full year after being hospitalised with the disease, a United Kingdom study indicated on Sunday, warning that long Covid could become a common condition. 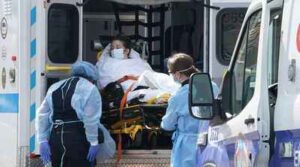 The study involving more than 2,300 people also found that women were 33 per cent less likely to fully recover than men.

It also found that obese people were half as likely to fully recover, while those who needed mechanical ventilation were 58 per cent less likely.

The study looked at the health of people who were discharged from 39 British hospitals with COVID-19 between March 2020 and April 2021, then assessed the recovery of 807 of them five months and one year later.

Just 26 per cent reported a full recovery after five months, and that number rose only slightly to 28.9 per cent after a year, according to the study published in The Lancet Respiratory Medicine journal.

Read Also:  WHO Alerts Countries To Increase In Hepatitis Cases Of Unknown Origin

“The limited recovery from five months to one year after hospitalisation in our study across symptoms, mental health, exercise capacity, organ impairment and quality-of-life is striking,” said study co-leader Rachel Evans of the National Institute for Health and Care Research.

The most common long-Covid symptoms were fatigue, muscle pain, poor sleep, slowing down physically and breathlessness.

The study, which will be presented at the European Congress of Clinical Microbiology and Infectious Diseases, is ongoing and will continue to monitor the patients’ health.