Home » Professionalism Will Be Top Priority In 2022 – COMTUA

Professionalism Will Be Top Priority In 2022 – COMTUA

The Council of Maritime Transport Union Associations (COMTUA) says that enhancing professionalism in all of its operations will be its top priority in 2022.

The President of COMTUA, Mr Yinka Aroyewun, said this in an interview on Wednesday in Lagos. 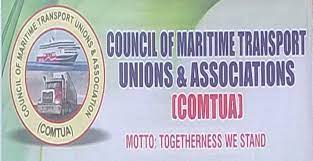 Aroyewun added that the association’s top priority in 2022 include ensuring that members vehicles were in good condition and enforcement of traffic rules and regulations to ensure an accident free society.

He said that in enforcing standards for drivers, they had numerous ways even by government, first, was to ensure renewal of road worthiness every six months.

“Any vehicle that is not roadworthy is not certified by government.

“So, if anybody is associating accident with vehicles roadworthy certificate, they should not only blame the truck owners or drivers.

“The government should also share in the blame because the bad roads too are major causes of accidents in some instances.

“Apart from the road worthiness checks of the Federal and Lagos state governments, Nigerian Ports Authority (NPA) also do check and all these checks are paid for,” he said.

He said that NPA was charging truckers N10,000 on the minimum safety standards and for the road worthiness, they pay in the neighborhood of N5,000 to N10,000.

Aroyewun noted that the council ensure vehicles using the road were worthy except for those that were compromised and the compromise was not only by our members but in connivance with agencies of government.

He said that they were doing everything possible to ensure that when agencies of government do compromise, truckers were not allowed to do so and this would be part of their target in 2022.

Aroyewun said that the council would also prioritise welfare of members and ensure an enabling environment for businesses.

According to Aroyewun, the convenience in doing business and a seamless environment to do it, impacts positively on cost of goods in the market.

“We will all bear the consequences of buying at high prices if the business environment is not favourable as most imported goods will not get to the warehouse without the inclusion of drivers.

“It is the responsibilities of our members to transport them to the warehouse and to the doorsteps of the users.

“On the other hand, the agencies of government that are meant to enforce law are in most cases working against the law, they partner with criminals and hoodlums on the road.

“There are instances when the hoodlums loose the brakes unknown to the driver and the fuel hose so that the vehicle will break down in no long a distance.

“And when this happened, they will not allow the driver or conductor to fix the problem,” he said.

He noted that they would invite the Lagos State Traffic Management Authority (LASMA) to tow the vehicle away to their enforcement point where instead of mentioning penalty would give ticket and discuss exorbitant rate of settlements.

“These people are doing a great disservice to our members and the nation because whatever cost we incurred will still come back to the final consumer of the goods.

“We are appealing to government to provide an enabling environment so that the sector can thrive and contribute to the economy,” he said.