Findings by Shipping Position Daily have revealed that the heavy road traffic along Mile 2 -Tin Can port axis on the Apapa –Oshodi expressway have eased considerably, owing to the partial completion of the road construction. 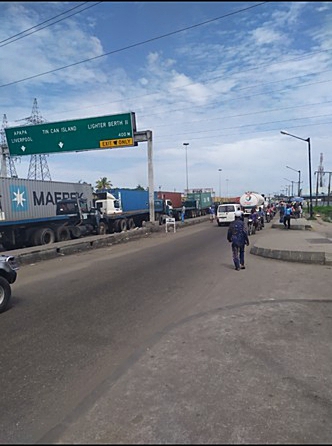 Recall that the Mile 2 Tin Can road construction has been ongoing for many years with several unfulfilled promises given by the Federal Ministry of Works.

Our correspondent who took a tour along the Mile 2 -Tin Can port access roads last week observed that a portion of the road has been fully completed and opened for motorists driving from Mile 2 down to Tin Can Island Port gate inwards Apapa.

There is also a free flow of traffic for motorists coming from Ijora Bridge inwards Apapa.It was however observed that the Apapa-Oshodi main carriageway from Cele Bus stop have been fully closed as motorists now use the service lanes from Cele Bus stop to Mile two on both sides.

The construction of a flyover bridge by the Lagos State government at Second Rainbow bus stop by FESTAC link road is also about 70 percent completed.

However, our correspondent observed that there are still heavy traffic on the Tin Can Port-bound side of the road due to the heavy presence of Tankers as well as containerised trucks. The Mile 2 to Tin Can access road is not navigable for trucks going to Tin Can Port from Mile 2.

Motorists are forced to use the service lanes after Coconut bus stop towards Mile 2 due to indiscriminate parking of some tankers and trucks at the sides of the road. Our correspondent also observed that some parts of the newly-constructed road have been turned into a refuse dump site.

Similarly, trucks coming from the Tin Can port towards Mile 2 also use the service lanes dedicated for motorists thereby causing long queues of vehicles.

In a chat with the National President, Council of Maritime Transport Unions and Associations (COMTUA), Mr Adeyinka Aroyewun, he noted that the tanker trucks parked indiscriminately on the Mile 2 Tin Can port access road are not making the road accessible for truckers who have jobs to do at the port.

Aroyewun also explained that the high presence of hoodlums on the road have forced truck drivers to use the service lanes dedicated for motorist, which is a major source of perennial traffic along Mile 2  to Tin Can access road.

According to him, the traffic situation along Mile 2 -Tin Can port access road will be solved, if the presence of multiple check points are eradicated with proper scheduling of both tanker and container trucks.

“A portion of the road has been opened for motorists; however, the clog of tanker trucks on that road is not making the road accessible. They are not orderly. They are just parked on the road therefore if you join that road, at the end of it you will find out that there is no way you can access Tin Can. They are parked there and leave the vehicle there and go wherever until is it time for them to go and load.

“In addition to that, the hoodlums have increased their number of extortion points on that road to the extent that unwillingly drivers are harassed and their vehicles vandalize and this is also discouraging us from using the road. They are the one making the use of the express road difficult, so that you will have no choice than to ride on the service lanes” Aroyewun said.

On his part, the Administrative Secretary of the Association of Maritime Truck Owners Association (AMATO), Mr Bala Muhammed also condemned the presence of many extortion points and presence of many faceless non-state actors in collaboration with some corrupt government security agencies.

Bala Muhammed however called on the government to monitor and pay more attention to the enforcement architecture on the Mile 2-Tin Can port access road to ensure sanity in road traffic at that axis.

“There are so many artificial barriers and checkpoints stopping the free flow of traffic along the Mile 2 -Tin Can road. We are calling on the government to see what they can do to reduce the number of extortion checkpoints on both the inbound and outbound parts of the port access roads” Bala appealed.