More than 150 leading companies and organizations including oil majors and port authorities have called for the global shipping industry to be fully decarbonised by 2050, urging governments to step up action warning time was limited. 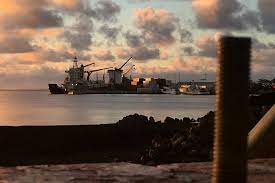 With about 90% of world trade transported by sea, global shipping accounts for nearly 3% of the world’s CO2 emissions and the sector is under growing pressure to get cleaner.

UN shipping agency the International Maritime Organization (IMO), has said it aims to reduce overall greenhouse gas (GHG) emissions from ships by 50% from 2008 levels by 2050, but industry groups are calling for accelarated action from governments.

In the latest initiative companies and groups – from shipping, chartering, finance, ports, and fuel production – say stronger measures are needed to ensure the sector will meet the climate goals set by the Paris accord, which seeks to limit global warming to less than 2 degrees Celsius.

The Call to Action initiative, developed by the World Economic Forum, the non-profit Global Maritime Forum and other partners, said decarbonization of shipping could “only happen with the urgency and scale needed” if governments and regulators established proper policy frameworks.

“Policymakers have a historic opportunity to accelerate this process by introducing a global carbon levy on marine fuels, to drive decarbonisation and incentivise investment in zero emissions fuels and vessels,” said Jeremy Weir, CEO of trading company Trafigura.

An IMO spokesperson said the UN agency had a “clear plan of work ahead,” including discussion of further measures to reduce GHG emissions from ships, which would provide member states “with the opportunity to review the current strategy and put forward proposals for new ambitions.”

The initiative’s other signatories include container lines A.P. Moller – Maersk, MSC and Hapag Lloyd, oil majors BP and Royal Dutch Shell, mining groups BHP and Rio Tinto, agri groups Cargill and Bunge and others such as the ports of Rotterdam and Antwerp as well as the Panama Canal Authority.