Troops of Operation Delta Safe, have in the last seven weeks, dismantled a total of 337 illegal refineries and arrested 141 oil thieves across Niger Delta region. 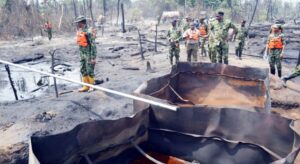 The Director, Defence Media Operations, Maj.-Gen. Bernard Onyeuko, made this known at the Defence Headquarters bi-weekly briefing on Thursday in Abuja.

Onyeuko said the feat was achieved through the subsidiary “Operation Octopus Grip”.

He said the operations were conducted in creeks, towns and communities including Jesse in Ethiope Local Government Area, Otagbo Creek, Escravos River and Benett Island in Delta State.

“Operations were also conducted at Brass creek, Beneside and Ndoro Waterways Ekeremor all in Bayelsa as well as Opumaki, Cawthrone Channel all in Bonny Local Government Area of Rivers,” he said.

He added that two trucks with sludge, 22 wooden boats, three fibre boats and four tankers were also impounded while scores of suspects were arrested.