A search and rescue officer from Viet Nam, who repeatedly risked his own life to save 12 others in a daring three-day long sea rescue, has received the 2021 IMO Award for Exceptional Bravery at Sea. 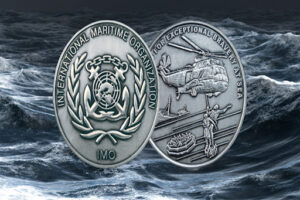 During the IMO Awards event, recipients of letters and certificates of commendation were recognized, as well as seafarers who have been impacted by the pandemic; and merchant vessels involved in the rescue of migrants at sea. A video film showed the recipients of certificates and the main award, since they were not able to attend in person.

At IMO Headquarters, Mr. Paul Sadler, former representative of Government of the United Kingdom to IMO and of IACS, received the International Prize for 2020.

His heroic search and rescue effort:

Mr. Khoi was recognized for his actions over a three-day period (8-10 October 2020), when he repeatedly risked his life to rescue 12 crew members and some fishers trapped on board the sunken cargo vessel Vietship 01. The ship had been swept away as it was docking at the Cua Viet Port, due to widespread flooding and wind gusts of 74 km/h caused by typhoon Linfa. Mr. Khoi repeatedly swam through strong waves to perform the rescues. The judges were very impressed by his courageous actions and tireless rescue attempts which demonstrated truly exceptional bravery and determination.

“I am very honoured and moved to be nominated for the noble IMO award for act of exceptional bravery. I hope that with such recognition I can radiate the courage and bravery of the Vietnamese people, so that there will be more examples in the future for those striving to develop the country’s maritime industry,” said Mr. Khoi, in his acceptance video.

Mrs. To Minh Thu, Deputy Chief of Mission and Counsellor at the Embassy of Viet Nam in the United Kingdom, was at the event to receive the medal and certificate on behalf of Mr. Khoi.