Algeria, Niger and Nigeria held talks this week on the revival of a decade-old project to pipe gas across the Sahara, a potential opportunity for Europe to diversify its gas sources. 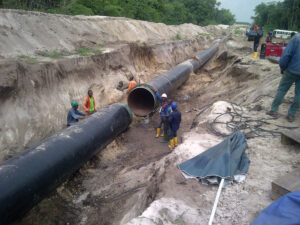 According to the statement, the three countries have set up a task force for the project and designated an entity to update the feasibility study.

The Trans-Saharan gas pipeline is an estimated 13 billion U.S. dollars project that could send up to 30 billion cubic metres a year of supplies to Europe.

The idea was first proposed more than 40 years ago and an agreement signed between the countries in 2009, but progress stalled.

The revival comes at a strategic time, as the European Union seeks to wean itself off Russian gas following Russia’s invasion of Ukraine, and is seeking alternative sources.

The pipeline would allow Europe to diversify its sources of natural gas supply and also give several African states to access this high value energy source.

With a length of 4,128km (2,565 miles), the pipeline would start in Warri, Nigeria, and end in Hassi R’Mel, Algeria, where it would connect to existing pipelines that run to Europe.

Nigeria also took steps this month to move forward on another long-awaited pipeline, which would go through West Africa and Morocco to Europe.

Energy ministers of the three countries will meet again in Algiers at the end of July to validate the proposals of the newly installed task force, the statement added.