The Nigerian Army says the troops of 6 Division, operating under “Exercise Still Waters”, have conducted raid operations and destroyed five oil bunkering camps with 16 cooking ovens and 21 reservoirs in parts of Bayelsa and Rivers States. 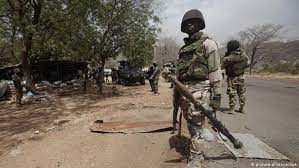 The Director, Army Public Relations, Brig.-Gen. Onyema Nwachukwu, stated this while briefing newsmen in Abuja on the ongoing army exercises across the country.

Nwachukwu said the troops in conjunction with personnel of sister security agencies, conducted aggressive night patrol to Amousa in Ahoada East Local Government Area of Rivers following credible information on the activities of bunkerers in the vicinity.

According to him, a total of three dumps with illegally refined Automotive Gas Oil (AGO) were subsequently destroyed.

“This was followed by another raid operation on Oct. 7 within Opromor-Peretoror in Ekeremor Local Government Area of Bayelsa.

“The raid led to the destruction of five bunkering camps, 16 cooking ovens and 21 reservoirs,” he said.

He said the suspects were duly handed over to relevant authorities for further action.

The Army spokesman further stated that troops of 81 Division, had on Oct. 7, intercepted a large barge of illegally bunkered petroleum products along the Ojodu-Berger waterways.

He added that a Joint Patrol team, comprising troops of 2 Division, paramilitary personnel and vigilantes, rescued 18 kidnap victims from kidnappers’ hideout at Ezizubowa forest in Edo on Oct. 7.

According to him, the troops overwhelmed the criminals and forced them to flee the hideout.

“Troops subsequently rescued the kidnap victims and recovered 20 cartridges, 70 rounds of 7.55mm ammunition, one HP Laptop, 15 mobile phones, and the sum of N223,200, amongst others,” according to him.

Besides, he disclosed that troops of 81 Division also apprehended 17 suspected drug users and recovered a large volume of substance suspected to be Cannabis Sativa on Oct. 6.

He said that a foreign national in possession of several sacks of substances suspected to be Cannabis Sativa and other psychoactive drugs, worth about N6.5 million were intercepted.

“The suspect was arrested with two Guard belts and one pair of camouflage inner shirt and trouser, amongst other items,” he said.

He said the suspects were arrested with 160 gallons which the suspects confessed were used in conveying fuel to bandits.

According to him, troops of 6 Division had on Oct. 12 apprehended 7 suspects, while one human skull, one locally made pistol, one motorcycle and seven mobile phones were also recovered.