Nigerian Railway Corporation (NRC) workers have condemned the Oct. 20 attack on the Abuja-Kaduna train, describing it as an act of terrorism. 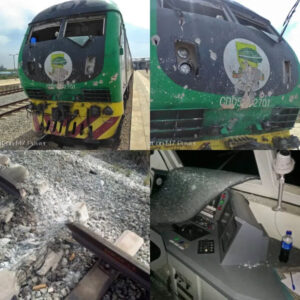 The workers, under the aegis of Nigeria Union of Railway Workers (NURW) and Senior Staff Association, NRC branch, expressed their concerns at a joint news conference, held on Thursday in Lagos.

Recall that suspected bandits had, on Oct. 20, attacked the Abuja-Kaduna train, forcing it to stop.

“It is also a brazen attack against humanity, which every Nigerian must rise against and condemn,” the workers said.

They also expressed worries over the safety mantra of the rail transport system in Nigeria.

“This is why the thematic preoccupation of our statement and position on this unfortunate incident is to ask some key questions.

“Was there any intelligence available to the relevant quarters and authorities about the attack on the Nigerian Railway train before it happened?

“If there was no intelligence, does that mean that the entire Nigeria’s security architecture were on holiday?

“If there was some intelligence available before the attack happened, what did the relevant agencies do with it?” they queried.

The union leaders urged the Federal Government and security agencies to come up with more result-achieving terrorist threat mitigation strategies that would practically make the recurrence of such attack on the train a huge impossibility.

They also appealed that the outlook of the security agencies should be an aggressive, very proactive, comprehensive, can-do and must-do type of attitude.

“Further to the foregoing, there must be close working relationships among all our security agencies so as to really make the trains the safest means of transportation in Nigeria and restore the commuting public’s confidence.

“The security situation of the country should be the basis for development of technology that is capable of enhancing our present safety efforts and detecting/sensing explosions, dielectric objects and any security threat at a distance.

“Nothing should be too expensive or sophisticated to achieve in the quest of the government to guarantee transit safety of passengers on the trains and the hard-earned railway facilities,” they said.

The union leaders also expressed concern that in spite of the risk being faced by workers and their exposure to hazards, they had yet to be insured.

The leaders appealed to government to strengthen the workers’ social benefits by insuring the workers on the train.

“We share with you today the general reaction of our members, which is that of regret and fear of the unknown.

“None of the driving crew, train ticket checkers, civil engineering and mechanical engineering workers and all other workers of the corporation, who are exposed to hazards in their various lines of duties, is insured,” they said.

The labour leaders called for the review of NRC workers’ salaries, stressing that it was through this that they could be further motivated to be more productive.