Investigations by Shipping Position Daily have revealed that several clearing agents working at the nation’s border at Idiroko, one of the nation’s border towns in Ipokia Local government area of Ogun state may have lost their jobs as business activities in the town have totally paralysed due to the prolonged closure of the land border with Benin Republic. 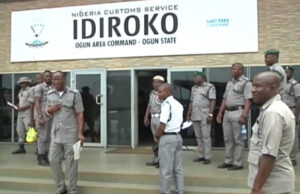 Our correspondent confirmed during a visit to the town last week, that the ever-busy border town where importation and exportation of goods such as Tokunbo vehicles, agricultural products among others are actively being carried out, has since been deserted with very few customs agents still in sight.

Our correspondent however observed movements of only petty traders and uniformed pupils in and out of the border with few officers of the Nigeria Immigration Service, Customs, as well as Port Health Service who were seated at the various duty posts with little or nothing to do.

Our correspondent who was only able to find just one clearing agents in the once-busy border town.

The clearing agent who identified himself as Akanbi Kayode and a member of the Association of Nigerian Licensed Customs Agent (ANLCA) lamented that since the closure, many clearing agents have been rendered jobless and that some of them have even left the profession.

Akanbi said: “We are out of jobs. We no longer have a source of livelihood. Since the closure of the border by this government, we have been out of jobs. We only depend on begging people for money to eat. We did not learn any other trade like being motor mechanics. The only job we have is this clearing and forwarding business and the government has decided to torment us by taking this job away from us by closing the border.

“We are just waiting for a new government that will open the border, hoping that we regain our jobs back and live a normal life again” he said.

However, reacting to the impact of the border closure, the Public Relations Officer of the Nigeria Customs Service (NCS), Idiroko Command; Ahmed Oloyede confirmed that the border had been closed since August 2019 and all import and export activities suspended till further directives.

He informed that the directive for the opening of border did not include Idiroko, but said the command is still carrying out its duties around the border areas. He noted that the Nigeria Customs at Idiroko is actively involved in anti-smuggling activities.

“When the declaration to open border was made, it only covered four borders which do not include Idiroko border, If you study the proclamation, you will understand that it was only four borders that were opened out of which Seme was one of them, but Idiroko was not included.

“But despite that, we are still carrying out our duties around the border areas. We are actively involved in anti-smuggling activities. Don’t forget that this is an enforcement area” he said.

Oloyede also noted that several seizures of prohibited goods and items have been made in the past months.

He informed that items such as rice, frozen poultry products, cannabis sativa, used clothing and shoes, vehicles both as means of conveyance and tokunbo vehicles that were smuggled in have been seized during operations.

“We have been making seizures of different prohibited items, such as rice, frozen poultry products, Cannabis Sativa, used clothing and shoes, vehicles both as means of conveyance and tokunbo vehicles that were smuggled in. We have a lot of items that have been seized during our course of operations” he noted.