Bureau Veritas (BV), a world leader in testing, inspection, and certification (TIC), has developed a formalized approach to support the safe carriage of containers in bulk carriers. 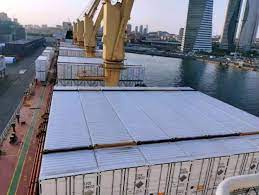 BV’s Guidance for Studying and Preparing a Bulk Carrier for the Carriage of Containers provides operators with pathways based on analysis and a thorough understanding of safety, regulatory and operational requirements. The guidance was developed by technical experts based in the Bureau Veritas Piraeus office, in Greece, in collaboration with the Technical Directorate in Paris.

Commenting on the guidance, Piraeus-based Paillette Palaiologou, BV Marine & Offshore’s Vice President for the Hellenic, Black Sea & Adriatic Zone, said: “We have significant experience and knowledge of bulk carrier design, classification, and operations across BV and particularly here in Greece, where we have numerous clients in the dry cargo market. Additionally, our class rules for container lashing and our own associated lashing software are highly sophisticated. The combination of bulker and boxship capability and understanding has enabled our teams to rapidly provide a framework to meet market requirements as demand emerges for bulkers to be able to carry boxes.”

The guidance outlines two main pathways for stowing containers in holds, either as a ‘block’ of lashed cargo without retrofitting of special container securing fittings, or as more conventional stacks of containers, in which case such equipment may need to be fitted permanently or temporarily.

The IMO Code of Safe Practice for Cargo Stowage and Securing (CSS Code) for ships that are equipped with a Cargo Securing Manual, provides a key reference point in its Annex 1 “Safe stowage and securing of containers on deck of ships which are not specially designed and fitted for the purpose of carrying containers”, as well as the calculation methods for forces acting on cargo units and the efficiency of securing arrangements.

However, the fact that bulk carriers are “not specially designed and fitted for the purpose of carrying containers”, combined with the potential need to maximize the intake of containers, may raise concerns related to the integrity of the vessel’s structure and the cargo itself, as well as the safety of the crew and the stevedores.

Paillette Palaiologou added: “In many ways, we are going back to the future, as general cargo and multi-purpose ships have always been able to carry containers. In the context of today’s market demands, the capacity to move containers in bulk carriers is a key advantage. With our guidance, we wish to ensure that modern analysis tools and techniques can be applied to support safety as well as modern operational efficiency.”