An injured pirate has been medevaced from the Danish frigate Esbern Snare after undergoing three rounds of amputation to address an infection, according to his lawyers. Three others remain in limbo on board as Danish prosecutors weigh options for bringing them to trial. 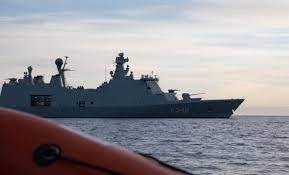 The injured man was captured after a firefight between Danish forces and a group of suspected pirates on Nov. 24. After spotting a suspicious skiff in international waters of the Gulf of Guinea, Esbern Snare launched a helicopter to investigate.

The helicopter crew spotted ladders and other pirate equipment in the skiff, so the Snare gave pursuit and launched a boat with a boarding party. The suspected pirate skiff did not stop when ordered, and Danish forces fired warning shots. In response, the skiff’s occupants opened fire on the helicopter and the boarding team. The Snare’s boarding team returned fire, killing four and wounding one. An additional suspect was lost over the side, and three survived without injury.

After capturing the survivors, Esbern Snare brought them aboard and held them pending arraignment and trial. The injured man had to have his leg amputated on board, and his condition did not improve. According to Danish outlet DR and Ghana Business News, he has been evacuated to the International Maritime Hospital in Tema, Ghana for treatment after the ship’s medical team performed three rounds of surgery to remove infected pieces of his leg.

3,300 nm away, at a city court in Copenhagen, the injured pirate’s court-appointed attorney argued that he should be extradited and flown to Denmark for a higher level of care. “Denmark has an obligation for him to receive the best possible treatment, and that would be in Denmark. If you want to continue the case and pursue the accusation, then you should get him to Denmark as soon as possible,” said his lawyer, Birgitte Skjødt, in a hearing Wednesday.

Danish prosecutors have been investigating options for transferring the suspects back to Denmark for legal proceedings, but they say that they have not found a nearby nation willing to support an extradition flight. While they look for options, Denmark’s National Police is sending two officers to watch over the suspect who was hospitalized in Ghana.

There may also be a political motive slowing down the extradition, maritime law professor Kristina Siig told DR. “There seems to be a strong desire that the suspected pirates should not enter Danish soil, as they are then afraid of having to process an asylum application from them,” she said.