After denying media reports that China was banning Indian crewmembers from crew changes due to fears of COVID-19, the Chinese Ministry of Transportation confirmed it was blocking crew changes for at least 30 days from certain crewing agencies and management companies. Chinese officials said the moves were being taken after positive cases of the virus were discovered among crewmembers coming ashore. 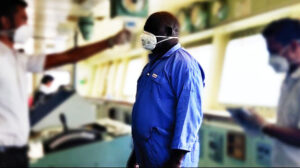 Chinese officials cited concerns over an increase in COVID-19 cases saying the country had reached a six-month high in the number of cases along with new variants of the virus. A total of nine ship management companies reportedly were notified that they would not be permitted to conduct crew changes or for crewmembers aboard ships they manage to come ashore for at least 30 days. It is not the first time China has banned individual companies from landing crewmembers. In February, China singled out two other companies saying that they had crewmembers with cases of the virus.

Recall that, last Friday, the All India Seafarer & General Workers Union released a letter sent to the Minister of Ports and Seaways saying the since March Chinese officials were not allowing ships with Indian crewmembers to enter their ports. The union called on the government to investigate the situation saying that as many as 20,000 Indian seafarers were at home because they could not get work due to the unofficial Chinese policy. Other Indian officials confirmed the union’s accusations saying that they had experienced similar situations.

Read Also:  Customs Deny Killing Anyone At Iseyin, Says Officers Were Not Drunk

Asked about the reports in the Indian media, China’s Foreign Ministry spokesperson, Zhao Lijian, said at a regular press briefing today, “We can confirm after verification that China has never imposed the so-called unofficial ban you mentioned. Relevant reports by Indian media are not true.”

Starting last summer, China also denied reports of boycotts related to the import of coal and other trade from Australia. At the time, they were accused of a trade embargo after Australia called for investigations into the origins of COVID-19 and placed blame on the Chinese. Numerous bulkers found themselves stranded offshore while Chinese officials said it was COVID-related restrictions at the local ports which were blocking the ships. Crews were reporting being stranded six months or more with governments including India and Italy intervening to help MSC and other Indian ship operators to complete crew changes.