Clearing agents operating in the maritime industry have kicked against the manning and maintenance of the recently-procured multi million Naira scanners by personnel of the Nigeria Customs Service (NCS). 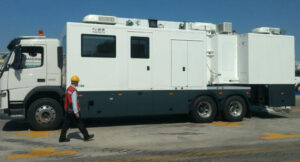 This is even as they alleged that Customs officers had deliberately destroyed the scanners that were previously handed over to them by the destination inspection agents at the expiration of their contracts.

But, not accepting the allegation of incompetence in the handling of the scanners, Deputy National Public Relations Officer of the Nigeria Customs Service, Mr Timi Bomodi assured that the scanners would be well-handled by Customs officers.

But, the freight forwarders argued that Customs must not be allowed to be the Judge and the Jury, when it comes to imaging and interpreting of contents of containers that arrive at seaports.

They posited that, rather, the manufacturers of the scanners should be engaged to manage them.

In a chat with our correspondent, the National Secretary of the Association of Nigeria Licensed Agents (ANLCA) Mr. Babatunde Mukaila noted that scanners would also help to track cargoes from evasion of duty and harbouring of questionable imports.

He stated that for every single seizure celebrated by the Customs, 10 must have escaped without been noticed by the men of the Service.

According to him, with the procurement of scanners by Customs, it should not be allowed to maintain the scanners, while urging the federal government to ensure that the manufacturers will be the one in charge.

He added that if Customs are allowed to man the scanners, the country will be at ground zero again within 12 months.

He said: “For the past five years, you will know that we at ANLCA have been agitating for scanners; you will agree with me that if Customs display one seizures, more than 10 must have passed without their knowledge, so we need scanners and it is the position of ANLCA that Customs cannot be the Judge and the Jury

“If Customs will be the one to determine the image of scanners, then they should not be one to interpret the image, those who produced the scanner should be given the contract to maintain it or else the scanners will pack up within 12 months and remain moribund, we have gone through this process before, Customs should not image a container and also interpret the container, there should be checks and balances.

“We need to put the Nigeria government on notice that Customs cannot be the judge and the Jury of these scanners” he said.

In his words: “If Customs has acquired scanners, what were they doing with the ones that were there before? Those scanners have a life span that is supposed to have a pre-investment procedure for the government.

Also speaking, the President of African Professional Freight Forwarders and Logistics of Nigeria (APFFLON) Otunba Frank Ogunojemite noted that Customs lacks maintenance culture and as such should not be allowed to maintain the scanners

“Nigeria Customs lack maintenance culture and there is no way they will be able to maintain and get the best results, if the Customs is allowed to maintain the scanners, they will end up like the way the first one collapsed.

“I will strongly support the opinion that it should be contracted out to the suppliers”. “If I remember vividly, the scanners collapsed not up to a year immediately the container manufacturers left”, he added.

Also, Mr Dele Olagunju, a freight forwarder argued that the scanners should be maintained by the manufacturers and not men of the NCS.

However, reacting to the call that the scanners be maintained by the manufacturers, the Deputy National Public Relations Officer of the NCS, Mr. Timi Bomodi informed our correspondent that the Customs service has well-trained scanner managers, operators, image analysts and others who will man the scanners.

He assured that, “the scanners recently deployed at the ports will be adequately maintained and we are sure they will be put to good use”.

According to him, “the decision for the type of examination designated for a cargo, is purely systems- driven and predicated on the risk level assigned a declaration. It is the system that chooses the method of examination.

“The scanners will be properly-maintained and the Service has well-trained scanner managers, operators, image analysts and others” he said.