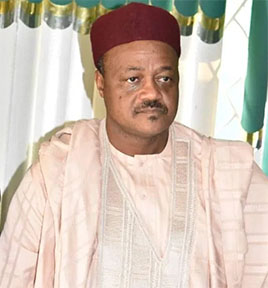 However, speaking at a recent function organized by the National Association of Government Freight Forwarders (NAGAFF) to honour the immediate past Executive Secretary of Nigerian Shippers’ Council (NSC) Mr. Hassan Bello, Col. Tsanni Abubakar, confirmed the end of the tenure of the council members, while he thanked the founder of NAGAFF, Dr. Boniface Aniebonam, for standing by him throughout his tenure as the chairman of the council.

He told the gathering that: “I must not forget the support enjoyed from the products and personality of NAGAFF that represented our association during my last tenure of chairman of CRFFN. I must confess they were of much support to my leadership. I am really so grateful to them for their contribution, special thanks to the founder of NAGAFF; Dr. Aniebonam who stood by me from the beginning to the end of tenure, thank you my brother well done”.

Recall that the refusal of members of the governing council to admit their tenure expiration has drawn the irk of critical stakeholders who accused them of insincerity and being corrupt as a result of refusing to admit and return government property back to the council.

Speaking recently with our correspondent, suspended zonal coordinator of South West of the Association of Nigeria Licensed Customs Agents (ANLCA), Sir John Oforbike opined that as long as members of the governing council are still enjoying the comfort of the position, it would be difficult for them to agree to terms that their tenure was over.

“So do you expect them to leave? If the system is working and the tenure is two years, once its two years then you are expected to leave and hand over the properties of the council. But there is no law here. Go and look at the history of the people there. Whatever they grab, it is very difficult to get it out of their hands or else they’ll cause confusion. They have decided not to leave because of the POF they want to collect” he said.

However, in a recent chat with our correspondent, a member of the governing council of CRFFN; Mr. Kayode Farinto, said the push for the amendment of the Act for a four-year tenure did not come from the CRFFN, but from the National Assembly.

Farinto admitted that the current governing Council of the CRFFN is seeking tenure elongation because it could not do much owing to circumstances beyond their power.

He had explained that after the Council election in April 2018, it took about three months before the inauguration of the Council and that with the COVID -19, it was difficult for the Council to really do much.

Farinto had informed our correspondent that there were so many loopholes in the Act that needed to be reviewed.