As ACG Commends Apapa, Tin Can, PTML Over Financial reports 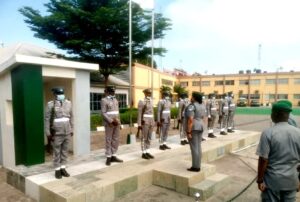 The new Zonal Coordinator of the service in Zone ‘A’; ACG Modupe Aremu stated this during her working visit to some Commands in Lagos yesterday.

She informed that the Customs Comptroller General, Col Hameed Ali (rtd) is concerned about the welfare of the officers, while also stating that the Customs boss had recently awarded some contracts for the construction of barracks, marine base and medical rooms for the junior officers.

She informed that contractors have moved into the site in order to have more accommodation for the officers so that they can be better accommodated.

She also informed that new vehicles have been bought and distributed to all commands and zones so that all officers are comfortable while carrying out their jobs.

Speaking on the financial performances of the commands the ACG commended the the three commands visited while also admonishing them to do more.

She also advised the Deputy Controllers and the Customs Area Controllers to do more on the job training for their officers especially younger officers who are new on the job.

Earlier at the Apapa Command, the Command’s Area Controller; Malanta Ibrahim Yusuf had informed that Command’s revenue collection between January and August 2021 stood at N526.9 billion which translates to 63.9% against the corresponding months in the year 2020.

Malanta disclosed that the collection in the month of August 2021 which stood at N87.8 billion is a remarkable feat as it is first of its kind in the history of the Flagship Command of the Service.

He also disclosed that 56 containers of various items ranging from Tramadol, Codeine syrup, used clothing’s, used tyres, tomato paste, unregistered pharmaceuticals, unprocessed wood and other sundry items were seized between the months of January to August 2021 with a duty paid value of over N28.3 billion.

On his part, the CAC Tin Can Island Port, Controller Musa MBA informed that from January 1 to 9 September, 2021, the Command generated a total of N320.9bn

He noted that the command during the same period last year 2020, generated a total of N248.8bn informing that a comparative analysis of the revenue collection for the two periods indicates a difference of N72 billion representing an improvement of 28.63%.

At the PTML Command the ACG also commended the CAC Controller Okun for making a remarkable N21 billion for the month of August describing the three commands as a model port for clearance of containers.