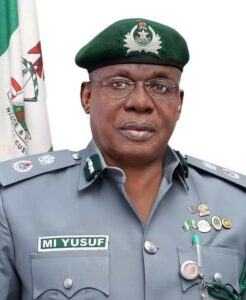 The Public Relations Officer, Apapa Area Command, Deputy Superintendent of Customs (DSC), Abubakar Usman, made this known in a statement made available to newsmen in Lagos.

According to Usman, the unregistered pharmaceutical products were contained in contained in a 40-foot container loaded with 1,427 cartons of the illicit product.

He noted that in what was described as ‘a sterling performance’, CG Ali praised Yussuf for exercising due diligence on the interception and seizure of the banned items.

In a commendation letter, signed by Comptroller K. A. Olusemire, the Comptroller General was quoted as saying: “By this act, you have demonstrated zero tolerance attitude for corruption and other vices in line with the policy thrust of this administration.

The letter also commended all officers of the Command for the laudable feat.