Customs Confirms Death Of One Officer, Declares One Missing In Clash With Smugglers

Suspected smugglers in Ogun state have killed an officer of the Nigeria Customs Service attached to the Federal Operations Unit Zone ‘A’. 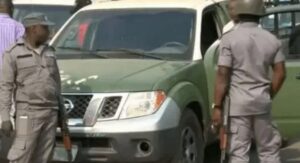 The incident was reported in a statement by the NCS on Thursday titled, ‘Attack on Customs Patrol Team by Smugglers Leaves One Officer Dead, Another Missing.’

According to the statement issued by the Public Relations Officer of the Federal Operations Unit Zone ‘A’, Theophilus Duniya, this happened on Tuesday in Fagbohun village of Yewa South Local Government Area in the state when the officers arrived in the village for an operation.

He said, the smugglers unleased terror on the patrol team, and two officers got missing in the battle. However, the lifeless body of one of the officers was found the next day while the other is still missing.

He however disclosed that some suspects have been arrested.

“The attacked officers are from FOU. One is confirmed dead, while the other one is still missing,” he said.

Duniya added, “It happened yesterday (Tuesday) in the afternoon. They were on information patrol when they were attacked. It was an unprovoked attack that ended the life of one and the other one is still missing.

“The one that was found dead, his rifle was missing; but we can’t say for the other one that is still missing until we get to the end of it. At the moment, we have some suspects in custody in relation to that murder.”

However, Duniya said he would not release the identities of the two officers yet, saying their families must be contacted officially.

“I cannot release their identities to you because at the moment, I’m not sure if their families have been contacted. So we need to reach out to their families officially before we go to the press,” he said.

Duniya also appealed to Nigerians to desist from attacking customs officers who were doing the lawful job assigned to them by the Federal Government.