Customs Hands Over Banned Drugs Worth N22m To NDLEA

The Nigeria Customs Service (NCS) in Kebbi has handed over siezed 632kg of Indian hemp and 199 sachets of 1,000 pieces each of five milligrams of Diazapam tablets to the National Drugs Law Enforcement Agency (NDLEA). 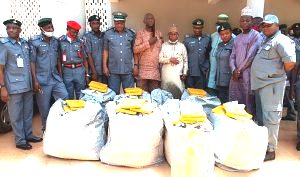 Comptroller Hafiz Kalla in-charge of Kebbi Area Command of NCS handed over the items to the NDLEA Commandant in the state, Mr Peter Odaudu, in Birnin Kebbi on Wednesday.

Kalla said that the handover was in compliance with the directive of the Comptroller-General of Customs, retired Col. Hameed Ali.

He also said that it was in the spirit of inter-agency collaboration.

Kalla said that the items were seized by officers and men of the command following intelligence reports.

“The items comprised 632 parcels of one kilogram each of Cannabis (Indian hemp) and two small sacks containing 199 sachets of 1,000 pieces each of Diazapam (5mg) tablets.

Kalla said that the command had, from January to date, recorded 47 seizures of assorted items, including 751 bags of 50kg of foreign rice concealed under sacks of onions in a truck.

“The duty paid value of the items stands at N51.76 million.

“The sum of N3 million was also generated as fees from auction sales of inflammable items and scraps within the period,” he said.

The comptroller reiterated the command’s determination to combat not only smuggling of goods injurious to the economy but also importation of any drug that could spell doom for the youth.

“In the words of Amb. Mukhtar Ibrahim: ‘Drugs are the enemies of ambition and hope, and when we fight against drugs we are fighting for the future’,” he said.

Receiving the drugs, the NDLEA commandant thanked the NCS for the seizure and synergy with NDLEA which, he said, would promote security and reduce crime.

“No one agency, by itself, can do it; it is this collaboration that will help us.

“We must collaborate against illegal drugs to reduce criminality and insecurity,” he said.

“There is need for synergy and collaboration to achieve results,” he said.