Home » Customs Intercepts 325,950 Litres Of Smuggled Petrol, Others Worth Over N1.48bn

Customs Intercepts 325,950 Litres Of Smuggled Petrol, Others Worth Over N1.48bn

The Seme command of the Nigeria Customs Service (NCS) on Thursday said it intercepted and seized 10,865 jerry cans of Premium Motor Spirit (PMS) litres with the Duty Paid Value (DPV) of N65 million as well as other contraband worth over N 1.48 billion along the various creeks around Badagry and Seme border area. 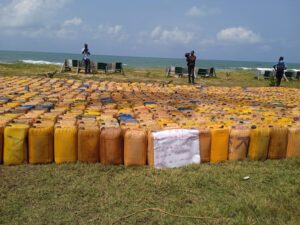 The command also seized 139 cartons of soft drinks,100 cartons of gabadol/tramadol, 120 milligrams, 2.8 kilograms and 306 parcels of cannabis sativa and 132 packets of tramadol capsules, even as two suspected smugglers were arrested for various crimes.

Addressing newsmen at the command, the Customs Area Controller, Comptroller Bello Mohammed Jibo attributed the seizures to the continuous surveillance of the beaches and creeks by the men of the command.

He added that the command also recorded another huge interception of 1,216 jerry cans of petroleum product 30 litres each, he said the arrest was made at the late hours of Tuesday, June 7, 2022 along Seme- Badagry waterways, adding that the 48000 litres of PMS has a DPV of N11,579 million. 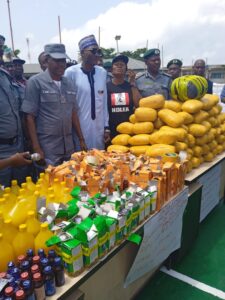 Meanwhile, the Command also handed over tramadol, cannabis sativa and other prohibited drugs to the operatives of the National Drug Law Enforcement Agency (NDLEA).

Comptroller Bello Jibo, said the seized drugs had a total Duty Paid Value (DPV) of N1,481,107,671. He added that the drugs were intercepted by the men of his command between January and May.

“In our quest to ensure the safety and well-being of Nigerians, most especially the fight against drug trafficking, today the command is handing over the items to NDLEA and NAFDAC.

“Others are three sachets of rofhymol, 32 cartons of fearless energy drinks and 139 cartons of soft drinks (expired).

“With the approval of Comptroller General of Customs, Col. Hammed Alli (rtd) in Line with the standard operating procedure and equally in the spirit of inter-agency, we have handed over the items to the two agencies,” he said.

“I appreciate the contribution of our stakeholders, host communities, other media friends for their unflinching support towards the successes so far achieved.

“I also thank the Comptroller General of Customs and the management for their support, guidance and motivation and also the gallant and patriotic officers of the command for their commitment to the progress of the nation,” he said.

Receiving the items, Mr Abubakar Wada, the Unit Commander of the NDLEA Seme command, said the hard drugs would be destroyed by the command.

Wada said the seizure would further reduce consumption of hard drugs by the people in the country.

He commended the Seme command of Customs for handing over the dangerous drugs to the command.