The Nigeria Customs Service (NCS) Murtala Muhammed Airport Command (MMAC) has intercepted hard drugs, military and police hardwares at the cargo section of the domestic wing of the airport. 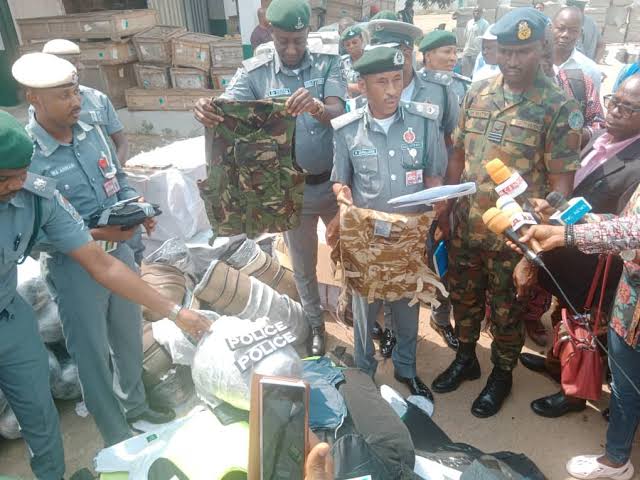 The Customs Area Controller of the Command, Comptroller Sambo Dangaladima, said this at a media conference on Tuesday in Lagos.

Dangaladima said the drugs consisted of 162 cartons of banned Tramadol hydrochloride 225 and 250mg, military and police hardwares, which were intercepted at the Skyway Aviation Handling Company (SAHCO).

He said the drugs originated from India and Pakistan and were routed through Addis-Ababa to Lagos, had an estimated Duty Paid Value (DPV) of N13.8 billion.

“These milligrams (225&250mg) are above allowable thresholds as contained in the extant laws.

“The drugs will be handed over to the National Drug Law Enforcement Agency (NDLEA) by this Command.

“We are also handing over the suspect by name, Samson Olayiwan Tantolohun, of 29 Okejide Street, Ejigbo, Lagos,” he said.

He added that the hardwares were 309 pieces of military helmets; 106 pieces of Military Armless Jackets, 352 pieces of ballistic body armoured pads and 119 pieces of Police Badges.

“The suspects connected to this importation could not provide the end user certificate, which is the lawful prerequisite for such importation.

“We have detained the suspects, Mr Olaolu Marquis, and the military wares while investigation is ongoing.

“The service is empowered by section 46B of the Customs Excise and Management Act to perform this act,” he said.

Dangaladima said the command was mindful that 2023 being an election year in Nigeria, the traffic of hard drugs that induced youths to do extraordinary things (when taken) was bound to increase.

“I can assure the unscrupulous importers that MMAC is the most dangerous route for their illicit trade, because we are always here to catch them and ensure that they face the wrath of the law,” he said.

He stated that the command generated N69.77 billion between January to December, 2022.

“The Command has done well in the area of revenue generation for the past year. I make bold to say that this Area Command never had it so good.

“This shows an overwhelming increase of N14.1 billion, representing 25.34 per cent.

“The 2022 yearly target was N66.9 billion but the command surpassed the target with N2.83 billion, representing 4.24 per cent increase,” he said.