The Nigeria Customs Service (NCS) on Monday described the death of eight people in Jibia Local Government Area of the state as unfortunate. 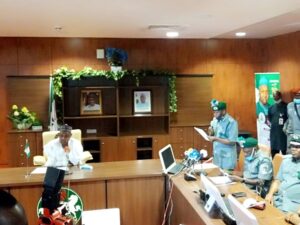 The Zonal Coordinator, Zone ‘B’ Kaduna, Assistant Controller General (ACG), Mohammed Uba, made this known when he paid a condolence visit to Gov. Aminu Masari in Katsina.

Recall that operatives of the NCS driving in pursuit of suspected smugglers in Jibia Lacal Government, on Aug 9, 2021, lost control and killed about eight persons and injured 14 others.

The ACG said: ”As a government agency, we are not unmindful of our paramilitary responsibility which is essentially to protect lives.

“As part of the visit, the Comptroller-General, rtd Col. Hamid Ali, has mandated us to interact with communities, leaders, the bereaved families and the victims of the accident with a view to report our findings.

“We appreciate the cooperation of the Government and the good people of Katsina State, other sister security agencies in the spirit of inter-departmental cooperation.

“Most importantly, we appreciate the host communities and the trading public while not leaving out the gentlemen of the press for their continued support,” he said.

Responding, Masari expressed concerns over the activities of the border drill in the state.

”These drills are not conducted in accordance with the rules and regulations guiding them.

”The people of Katsina State don’t deserve such treatment by the operatives of the customs’ border drill in the state,” he said.

He also urged them to apply intelligence in discharging their duties so as to avoid further loss of lives.

”You must pay compensation to the affected people and also prosecute the driver and other officers involved in the incident, if not we are taking legal action on this issue.

“The Katsina government is not supporting smuggling in any way, but you can imagine about 28 checkpoints on the Katsina-Jibia road. They are not checkpoints, but rather toll gates,” Masari said.

The ACG had earlier addressed the operatives of the Katsina command, calling on them to always respect human lives while on duty.

“Over zealousness by patrol officers should be minimised as reported cases will be punished.

“Adhere to the procedure on the transfer of seizures which must be intelligence driven relying on inter-departmental cooperation and collaboration,” he said.