The Nigeria Customs Service (NCS), Kano/Jigawa Command, says it seized 707 bags of smuggled rice and other items with Duty Paid Value of N41.3 million between July and September. 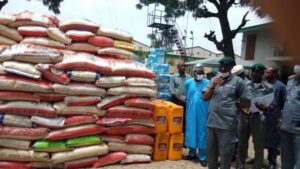 The Command’s Comptroller, Mr Suleiman Umar, made the disclosure on Thursday in Kano at a news conference on the achievements recorded by the command.

Other seizures made were 231 cartons of milk, eight cartons of macaroni, 30 packs of mosquito coils, 10 cartons of dry cell batteries and six cartons of snuff made in Ghana.

“Let me state clearly that the Customs and Excise Management Act (CEMA), empowers us to search premises for smuggled goods.

“CEMA also empowers us to patrol freely and to make arrest where applicable in order to enforce government’s fiscal policies,’’ he said.

The comptroller added that the command collected N16.9 billion revenue between January and August, 2021.

Umar said the command would not relent in its efforts at ensuring a secured atmosphere for businesses to strive in Kano and in Jigawa States.

He urged the media to continue to enlighten the public on the need to shun smuggling and pay accurate duties.

“We assure the people of our cooperation in facilitating legitimate trading’’ he said.