The Customs Area Controller, Kwara Command; Comptroller Hassan Ahmed has tasked traditional rulers in Kwara on community sensitisation to the dangers associated with smuggling prohibited goods into the country. 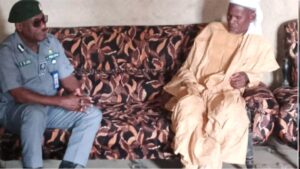 This is contained in a statement in Ilorin on Friday by Mr Zakari Chado, the spokesman of the command.

Chado said Compt. Hassan Ahmed, made this known during a visit to the traditional ruler of Bukuro, Baruten Local Government Area of the state.

He said that Ahmed acknowledged the critical roles of traditional rulers in curbing smuggling, especially in the areas of sensitisation and enlightenment of their subjects, critical stakeholders and society at large.

“The Controller pleaded that the enlightenment campaigns on smuggling activities should be intensified, as most of those who engaged in smuggling were not aware that it’s a crime.

“He emphasised that Customs alone could not stop the smugglers, particularly at this critical time as the myriad of irregular migration was on the rise.

“Also, increase in trans-border crimes such as smuggling of small arms and light weapons, human trafficking, drugs trafficking and terrorism are on the rise, adding that it must be tackled headlong,” the statement said.

Chado said the District Head of Bukuro, Mallam Aliyu Woru, said the visit was important, adding that seeking for synergy in sensitising his community would help them a lot.

“The district head pledged to do whatever it takes to support the comptroller to succeed, as smuggling was never a good thing to be encouraged,” Chado said.

“He, however, emphasised that synergy and collaboration amongst security agencies cannot be overemphasized, as no organization will work in isolation and succeed without the support of one another.

“He solicited for synergy and collaboration by sharing information to achieve one another’s set target,” Chado quoted the Area Commander as saying.