Customs Tin Can Island Port Hands Over 86 Parcels Of Colorado, Suspect to NDLEA

The Nigeria Customs Service, Tincan Island Port command in Lagos led by Comptroller Kunle Oloyede has handed over one suspect, a 4matic Jeep and 86 packs of Colorado weighing about 500 grams to the National Drug Law Enforcement Agency (NDLEA). 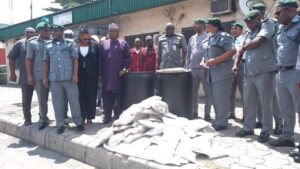 According to the Customs Area Controller, the handing over is meant to showcase collaboration amongst agencies of government and stakeholders in the supply chain of importation and exportation.

He said: “We are here to showcase substances, that we believe are illicit and to hand over same to our sister agencies, NDLEA, this shows the whole world that we collaborate, nobody can exist in silos. According to the articles of trade facilitation we are supposed to collaborate, because the result of this, is a safe society from drugs and security challenges”

Oloyede said the Command deploy intelligence and information from all agencies after due analysis and that, the command is not saddled with enforcement duties alone, but also to rid the society of such illicit items.

“On behalf of the CGC, Col. Hammed Ali (rtd) I am handing over this substance, a 4matic Jeep and a suspect to NDLEA for further investigation and prosecution. It is theirs to prosecute, we would not and shall not allow this kind of thing to go into the Society”, the Customs Controller stated during the handing over.

Responding, the Deputy Area Commander, Operations and Intelligence, NDLEA Ashiru Abdullahi thanked the Nigeria Customs for the continuous collaborations, especially the Custom Area Controller of Tincan Port Command. “He has been collaborating with us, very effectively and we want to thank him, on behalf of our Chairman, Chief Executive Buba Marwa and my Commander, I say a very big thank you”, he said.