The Nigeria Customs Service (NCS) says it will soon deploy drones at Seme for effective patrol in checking smuggling activities in the border area. 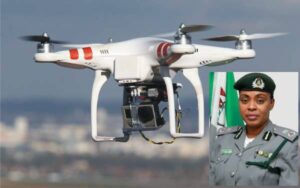 NCS Zone ‘A’ Coordinator, Modupe Aremu, an Assistant Comptroller General (ACG) of Customs, disclosed this on Monday during a working visit to Seme Border Area Command.

According to her, border management surveillance will be done electronically through the use of drones to ensure that there will be area overview of what is happening.

“Seme command visit is the end of my tour in Zone A and I must commend all the commands, they account for over 80 per cent revenue collection by the NCS and so they should keep up the good work.

“With the tour of all commands, I have seen that all the officers are doing well but they can still do better. And I am telling them that they should be expecting impromptu visits from the Zonal Coordinator, so they should not relax on the job.

“Also, e-customs’ N300 billion contract that is end-to-end automation that is about to kick-off is about Information and Communication Technology connectivity; when it comes on board, we are going to have electronic signature, drones patrolling the border,” she said.

She noted that the service was trying to minimize person to person contact to reduce human interaction and make the work faster and more efficient.

Aremu expressed satisfaction with the joint border post buildings that was commissioned on Oct. 23, 2018, noting that it ushered in an era of coordinated border management.

“This is one-stop-shop and from what the comptroller has shown me, it is what is practiced abroad; this is really commendable that what we see when we travel, we have it here in Nigeria,” she said.

She urged Seme Customs to keep abreast of all the Economic Community of West African States (ECOWAS) protocols in order to understand what was happening.

On enforcement activities, she urged the command to keep pushing as the nation at this point in time needed the service to properly secure its borders.

She expressed the hope that the scanner at the border would start functioning to help simplify processes as much as possible.

She urged the command to ensure proper compilation of case files and prosecution of arrested suspects to show the seriousness of the service in fighting smuggling.

Earlier, Seme Customs Comptroller, Bello Jibo, noted that enforcement activities were not affected by the border closure as the command made remarkable interception of 1244 suspected smuggled goods with a duty paid value of over N856 million.

He noted that despite unfriendly economic policies imposed on goods transiting through Benin Republic, the command was able to collect about N719 million as revenue and processed export volume of 635,149.23 metric tons with free on board value of N15.5 billion.

“The command has a very good understanding with host community and in cementing this relationship, the command built and handed over a modern toilet facility to the Badagry West Development Area and partnered with an NGO to equip the Badagry United Football Club.

“Some projects undergoing work or completed in the command are: 16 classrooms for primary school, construction of 30-man rank and file quarters and others.

“The challenges faced has to do with ICT interconnectivity at the Joint Border Patrol, signing of bilateral agreement, connection of the barracks to the national grid and inadequate junior staff,” he said.