Gov. Ifeanyi Okowa of Delta on Tuesday said that his administration would partner the Federal Government toward domesticating the African Continental Free Trade Area (AfCFTA) agreement. 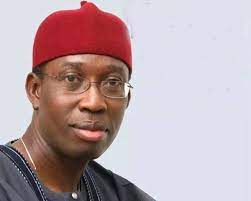 The governor gave the assurance in a meeting with a Federal Government Trade delegation led by the Minister for Industry, Trade and Investment, Mr Niyi Adebayo, in Asaba.

He urged the Federal Government to quickly address the issues of high cost of fund and poor power supply in the country.

He pointed out that there were bottlenecks associated with export trading and urged the Federal Government to work toward eliminating the constraints to encourage more traders.

He commended the minister for the enthusiasm in moving from state to state in ensuring that more states were involved in the trade agreement to boost export and increase internally generated revenue.

“It is of great interest to us and I am glad you are moving from state to state to sensitise them well enough and to enable us to collectively take advantage of the agreement to boost trade in the country.

“There is no doubt that in preparing to ensure that more states get into the market we will welcome this collaboration because it will enhance productivity once we have access to the market.

“We have tended to stay satisfied with crude oil without actually developing it in a way that it becomes more useful to us.

“We are glad that this relationship is coming at this time because it will actually stimulate and expand production, thereby creating room for greater employment and people will make more money.

“When more and more people get employed, there is less insecurity because when you take off more people from the unemployment market, you have less people available for criminal tendencies.

“We hope the issues of cost of fund and power supply will be addressed because they lead to high cost of production and affect producers in such a way that their products cannot compete favourably,’’ he stated.

Okowa also urged the federal government to ensure that setbacks involved in exports were taken care of because many exporters were already discouraged in doing the business.

Earlier, the minister, who was represented by the Director of Trade in the ministry, Mr Aliyu Abubakar, said the AfCFTA agreement sought to create a single market for Made-in-Africa goods with a population of 1.2 billion people and a combined Gross Domestic Product (GDP) of 3.4 trillion dollars.

He said the AfCFTA would eliminate tariffs on 90 per cent of tradable goods over five years for developing countries and 10 years for least developed countries.

Adebayo said the agreement would also expand market access for Nigeria’s exporters of goods and services which would, in turn, catalyse production growth and boost job creation in Nigeria’s economy.

He added that AfCFTA would stimulate Nigeria’s export diversification by providing preferential access to Nigeria products and services to the huge African market which currently sourced 85 per cent of imports from outside the continent.

Mr Francis Anatogu, the Secretary of the Committee and Senior Special Assistant to the President on Public Sector Matters, presented a progress report of the National Action Committee on AfCFTA.

He said the Committee had developed a National Implementation Plan for inputs from government and private sector stakeholders.

He further stated that domestication of AfCFTA, border regulations enforcement and rules of origin enforcement, trade facilitation and ease-of-doing-business as well as quality infrastructure improvement were some of the progresses made so far.