Our Committee Not Suspended - Member

Truckers operating in Lagos ports have expressed fears that the suspended committee on Removal of Abandoned Vehicles may regroup and intensify their activities in and around Apapa. 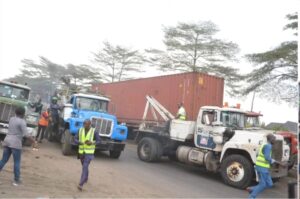 It would be recalled that the before the recent action, the Lagos State-owned on Removal of Abandoned Vehicles Committee (RAVC) had been suspended in 2021, while the suspension was lifted on December 30, 2021 after several appraisals and a review of the operational guidelines of the team by the state government.

But, the Lagos State Government had again about two weeks ago placed an indefinite suspension on the activities of the team in the 20 local governments and 37 local council development areas in the State.

But, speaking with Shipping Position Daily last week, a truck owner who identified himself as Mr. Richard Uzoeghelu, noted that to a great extent the RAVC has complied with the government’s directives.

He however stressed that if not adequately enforced and monitored the committee might continue their illegal activities under the guise of the Lagos State Traffic Management (LASTMA), to extort truckers.

Another truck owner and National Organizing Secretary of the Council of Maritime Transport Union and Association (COMTUA), Mr. Dike Collins told our correspondent that the RAVC has not fully complied with the state government directives.

Dike alleged further that, just last week, the committee forcefully arrested our trucks, under the guise of being an Enforcement Team of the Lagos State Ministry of Transport.

In his words: “The suspension is long overdue. We are not yet sure of their total compliance, because about some minutes ago I received a call that some trucks were carted away to Alausa in the name of the Ministry of Transportation Enforcement Team, they carted away four trucks. As I speak to you, the Committee is still holding one of my trucks. They have refused to relinquish such authority to hold my truck despite the directive”.

Speaking further, he said: “My truck is still parked at the Committee office, although they took the truck before the suspension. My driver called and told me some people were demanding money from him. I told him to park and not to give anybody money until I joined him. Before I could get there, he said some boys have beaten him up and taken away his truck. At first, we didn’t know where the truck was taken to. We thought it was a case of a stolen vehicle. We reported to the Police before we found our truck at Phase III. The official of the Committee gave me a ticket of N150,000. I have tried explaining to the official, but he remained adamant because all they are interested in is the money they extort from us. However, we are still pushing” he said.

When contacted, an official and member of the Committee, Alhaji Daud Somotan claimed that the activities of the 10-member committee were not suspended, but only ad-hoc members who were misbehaving during their operations were removed. He claimed that the committee has the power to tow and fine vehicles of traffic offenders in the state.

“I am one of the 10-Member committee that the Lagos State gave appointment, we the 10 members are not the ones the Governor said he suspended. It was all those ad-hoc committee members who were misbehaving during their operations that were suspended. We the 10 members have every authority to tow any vehicle that breaks down or misbehaves. We tow them to the appropriate quarters and give them tickets to pay their fine” Somotan said.

Reacting to the seized vehicle in the custody of the committee, Somotan said the said truck was impounded before the Lagos State directives and since then it has been held because it violated traffic rules and was fined.

Speaking directly, he said, “Concerning the case in question, it happened before the activities of the committee were suspended. The man (truck driver) committed an offence by parking his vehicle on the road for almost eight hours. We contacted him but he was recalcitrant, around 8 pm, I ordered the vehicle to be towed. His lawyer contacted me and I told him they should just come and pay the fine and take their vehicle away. The fine ticket was issued by the state members. I am the signatory to the ticket” he confirmed.

Also speaking, the National President of the Council of Maritime Transport Union and Association (COMTUA), Mr. Adeyinka Aroyewun noted that the suspension is a welcome development as he has not seen any of the activities of the RAVC in the last few days. He called on the state government to stand by its words.

On his part, the President of the Association of Maritime Truck Owners (AMATO), Chief Ogungbemi Oluremi noted that the association is putting in place a monitoring team to ensure that truckers comply with traffic laws. He also commended the State Government for this feat.