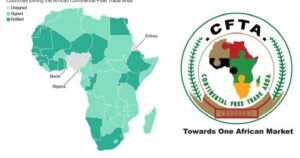 Permit me to spend time on the investment opportunities that the AfCFTA offers;

And spend some time on harnessing these opportunities.

AfCFTA as an Opportunity

Africa Free Trade Agreement AfCFTA, is in itself a huge opportunity.

What do I mean?

The Largest in the world measured by the number of countries (55) participating;

· With a combined gross domestic product (GDP) valued at US$3.4 trillion;

· With potential to lift 30 million people out of extreme poverty

The agreement initially requires members to remove tariffs from 90% of goods, allowing free access to commodities, goods, and services across the continent.

The United Nations Economic Commission for Africa estimates that the agreement will boost intra-African trade by 52 percent by 2022.

The trade protocol applies to imports, exports and goods in transit.

Is the criteria needed to determine the nationality of a product?

The exporter, or the authorized representative, must complete all details required for a complete declaration of the correctness of the application for a Certificate of Origin.

The process will be explained at a later date.

Imports will also benefit from the tariff-free regime by attracting zero tariffs.

Importers must make sure their suppliers are transporting goods that can be identifiable as ‘originating in Africa’.

· Government and state bodies, as well as private companies, will all be looking for legal representation and guidance in relation to AfCFTA’s implementation, compliance and disputes arising under the agreement

· The service protocol enables practitioners to provide legal services outside their borders, whether that be directly, via commercial presence, or by establishing firms through mergers and acquisitions.

· There is a growing demand for international trade lawyers across the continent.

· When a customs union is eventually adopted, and the full liberalisation of trade in Africa reached under AfCFTA, a lawyer trained in one African country could cross the border to work in a neighbouring country

· There will be a reduction in the cost of shipping in Africa and improved efficiency, with the establishment of the Continental Customs Union, and implementation of trade facilitation measures in one African country could cross the border to work in a neighbouring country

· AfCFTA promises to expand the intra-African trade from the traditional regional economic communities – where trade between African countries is currently domiciled – to the continental level. This will help diversify African economies and promote continental trade integration that will see an increase in containerized trade and port traffic volumes

· There will be an increase in demand for Maritime Transportation Services

Women are quite important because of the significant transformational impact they hold for defeating poverty.

Over 70 percent of cross-border traders, especially those engaged in informal trade, are women.

The Opportunities For Women

Two groups are specifically mentioned in the Agreement: women and youth. Article 27 (2) (d) of the Protocol on Trade in Services, State Parties are mandated to: “improve the export capacity of both formal and informal service suppliers, with particular attention to micro, small and medium size; women and youth service suppliers”.

According to World Bank’s analysis, the AfCFTA will boost intra continental exports by over 81% and exports with non-African countries by 19% by 2035.

· Create a platform for members intending to enter the Africa Free Trade area.

· Members must have access to information and training opportunities on trade networks and their voices must be heard in “AfCFTA negotiations, policymaking and decision-making.”

· Members need to engage in strategic partnerships to facilitate access to African Markets.

· Members support to ensure that members business are registered and commence operations all over Africa.